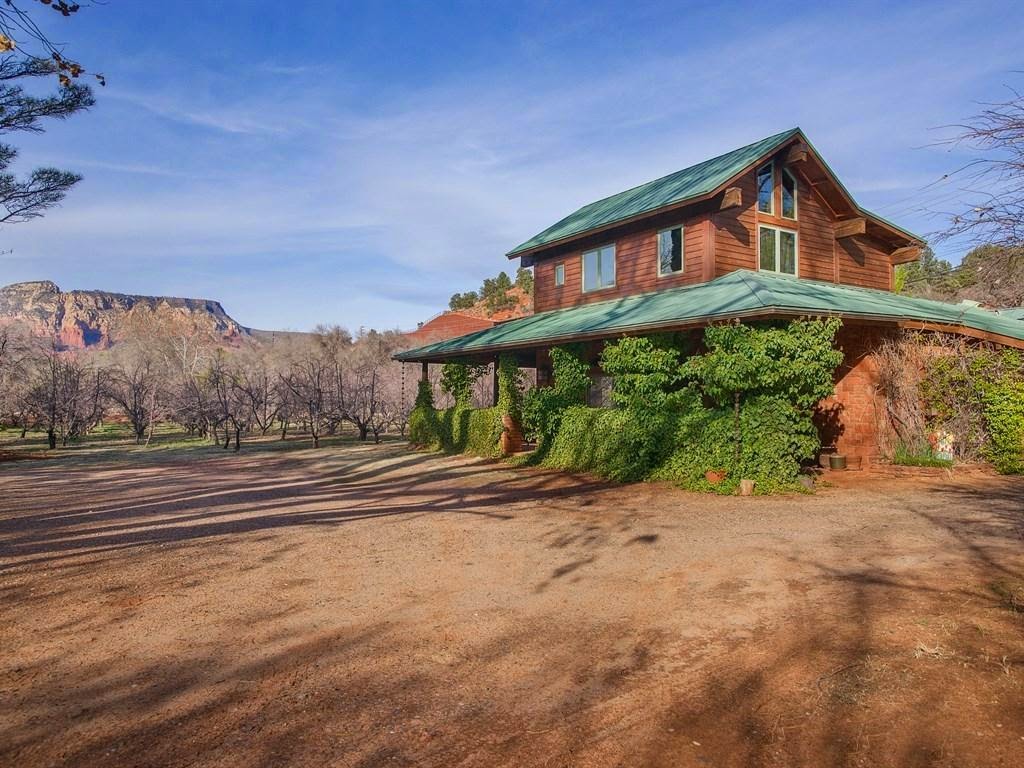 I received this from my Arizona real estate person. The place is a bit eccentric, but would be more so after I transformed portions to look like the Imperial War Museum. It’s in the Sedona area (Oak Creek, AZ).

It’s a working apple orchard complete with cooling room for apples and a press for cider. Sigh. Really big second sigh. It has its own retail store about 80 meters from the main house out on the highway where you can peddle wares when apples are in season. I love apples. I love burning apple wood in my BBQ and imparting that flavor to the steaks and burgers. 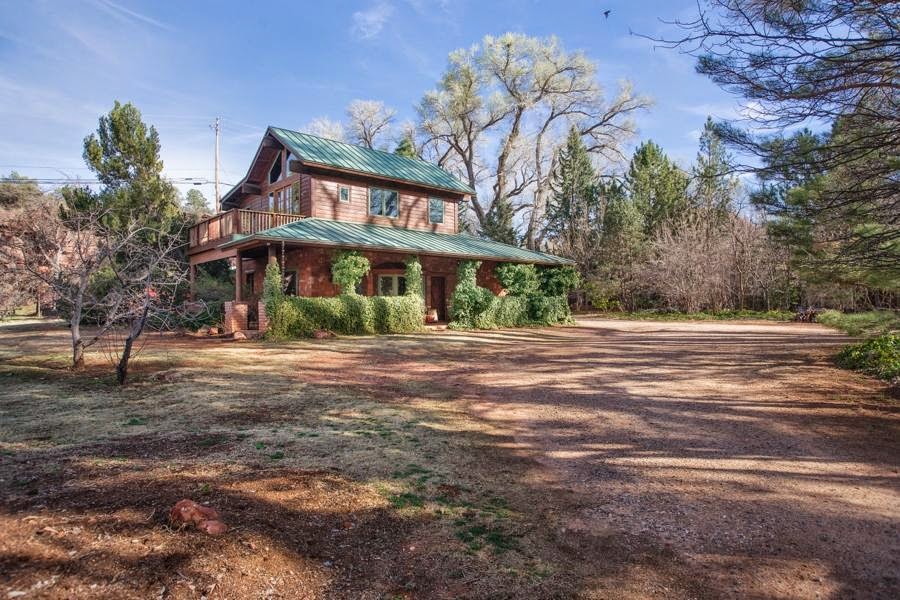 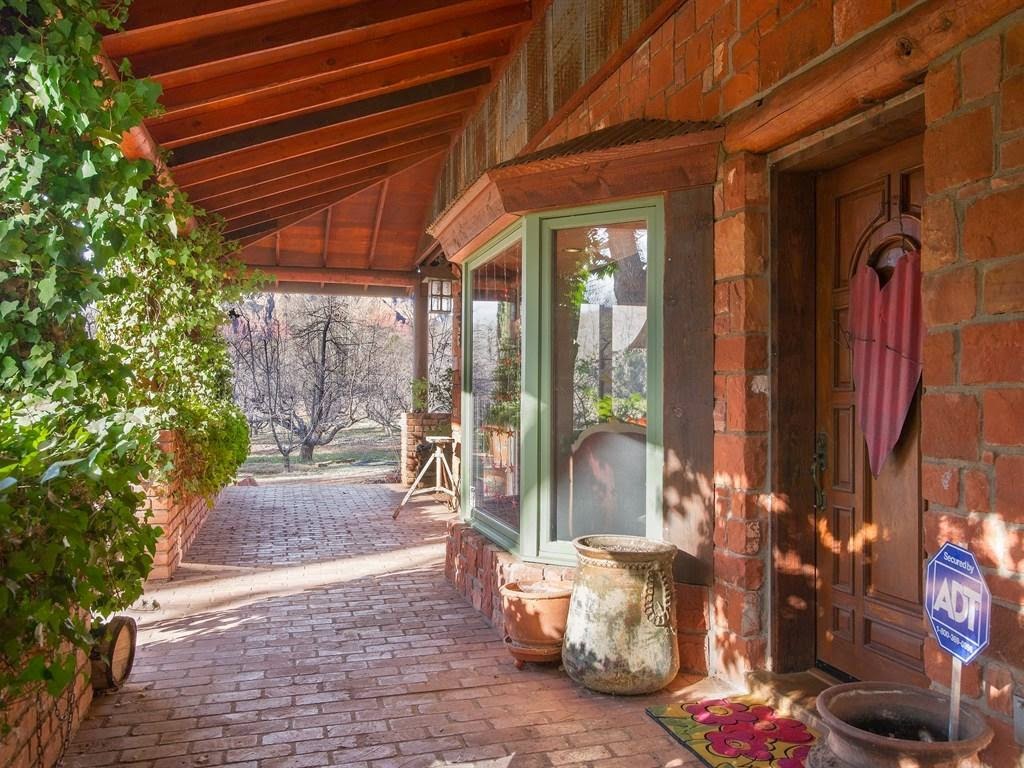 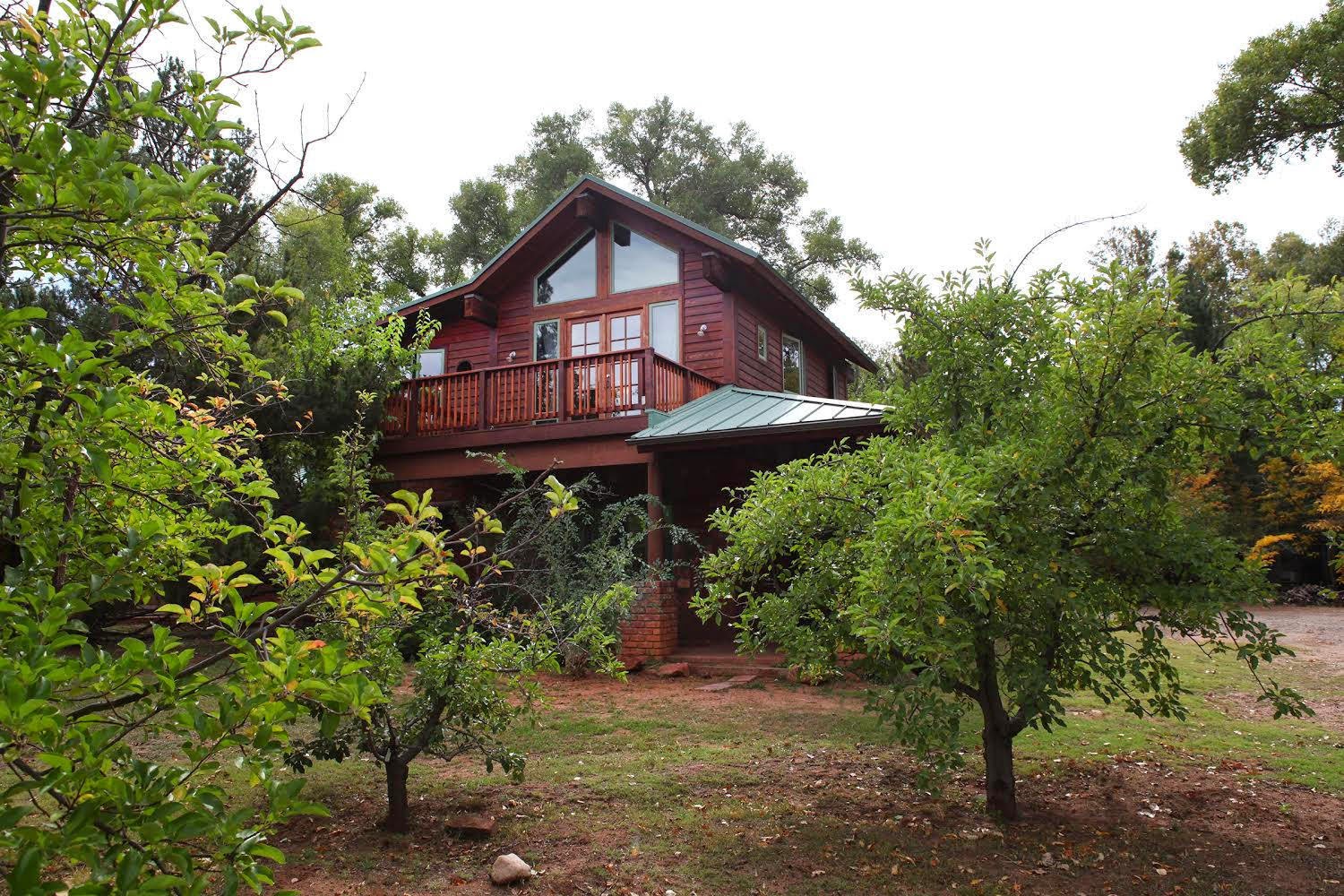 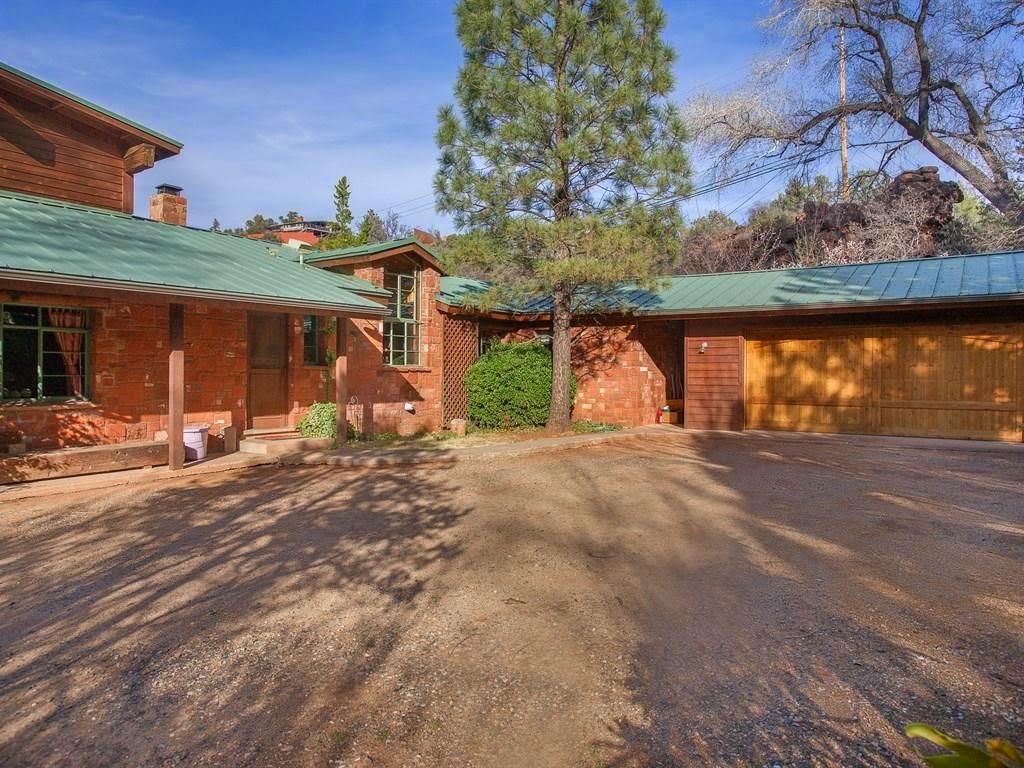 No, it doesn’t come with a Rhodesian Ridgeback named Matthew B. Ridgeway (Matt for short), but that’s easy to remedy.
Arizona is an open-carry state — for snakes and such.

This incredible artist’s home is graced with thoughtful updates and whimsical design and rests upon a sprawling two and a half acre parcel. An enchanting masterpiece of stone, timbers and passion is set amidst an irrigated apple orchard of four hundred producing trees. Included are a guest cottage, apple press and sorting room, tree houses, gardens and a grand-fathered retail produce store and an apple and juice stand with dedicated highway access and parking. Bright and sunny custom kitchen blends stone, brick and colored concrete along with upscale appliances: Commercial grade Dynasty double oven and Garland hood vent Sub Zero refrigerator and custom cabinetry for an inviting space. Open to the dining and family room gathering place; embraced by a native rock, floor to ceiling fireplace, Saltillo tile, Dutch door and a wonderful window seat. Access to the screened in porch for summer dining is afforded as well.

The decor is not strictly to my taste, but that’s the easiest thing to fix. Add some leather sofas and a more masculine approach to it, framed photos of Nathan Bedford Forrest, etc. and it would come around nicely. 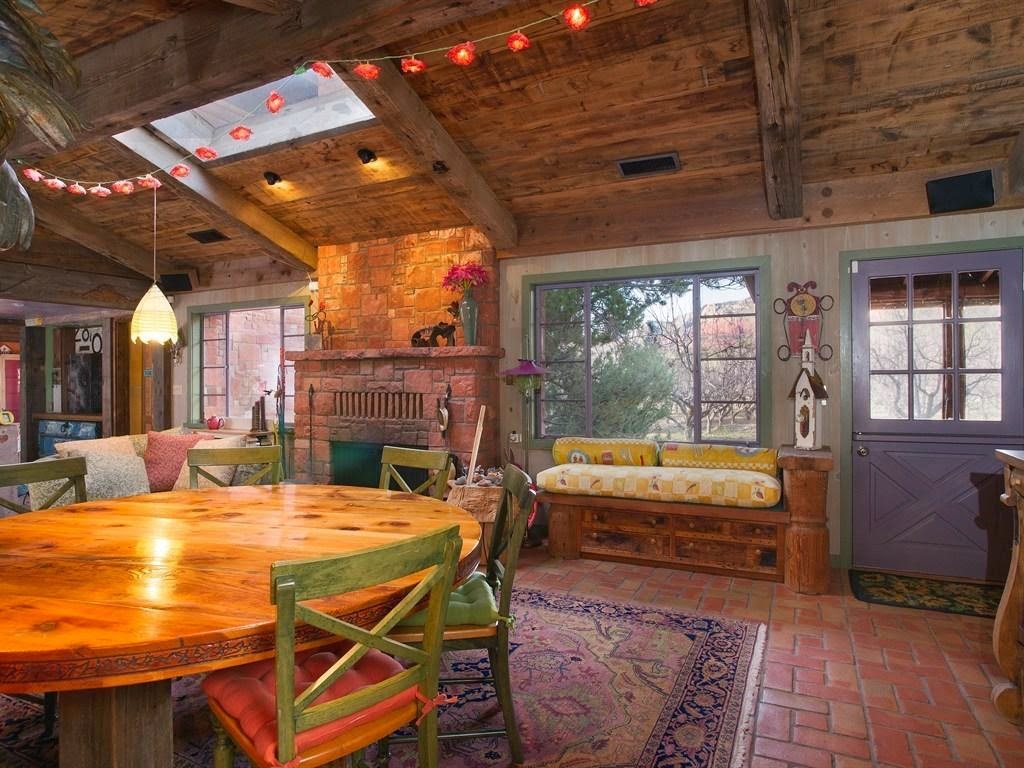 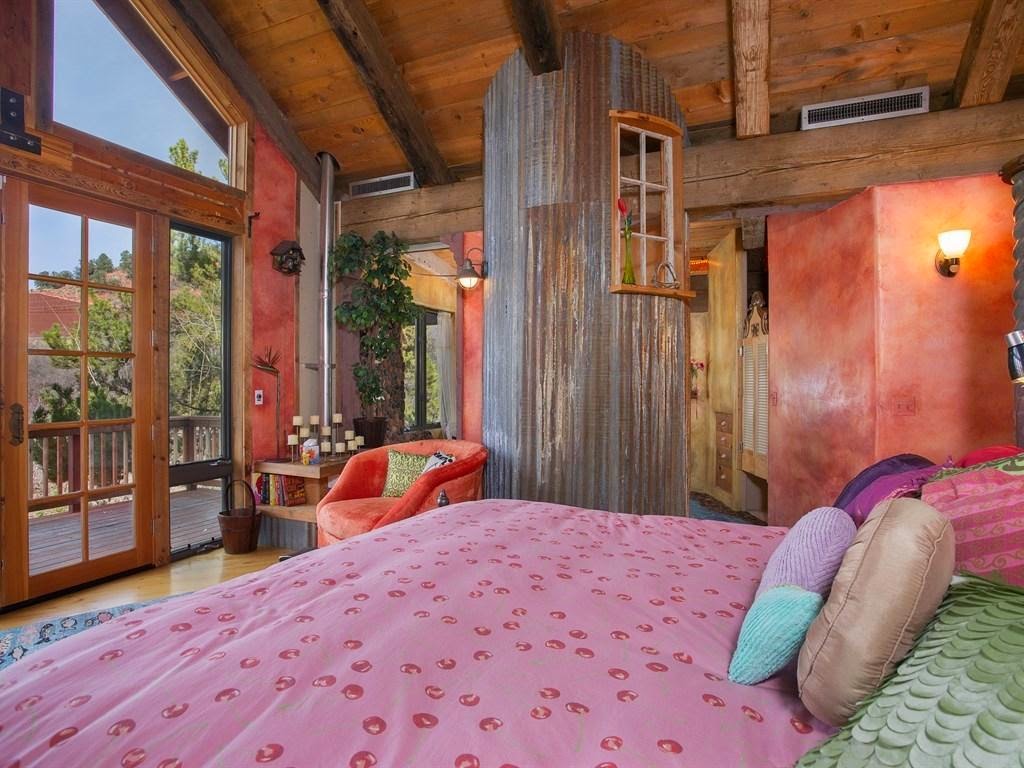 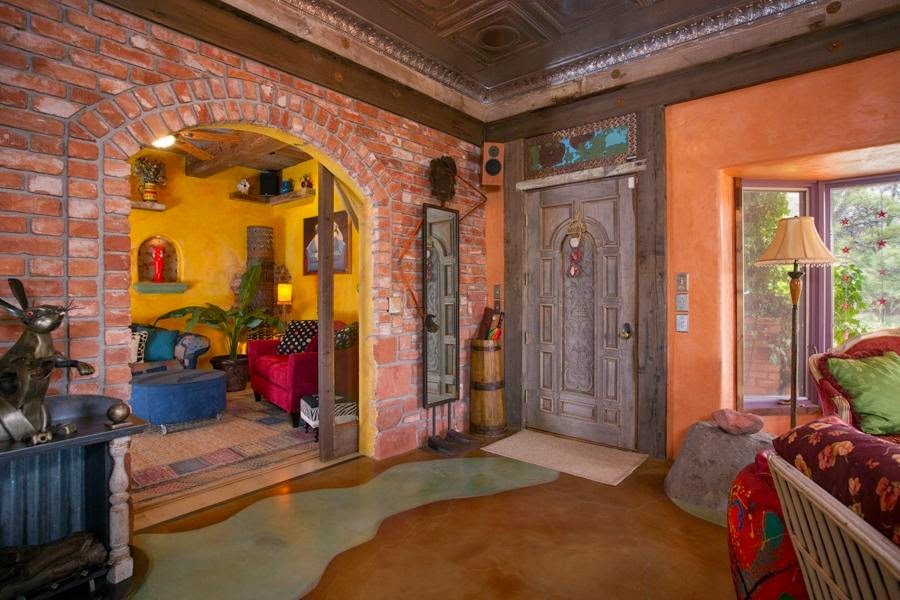 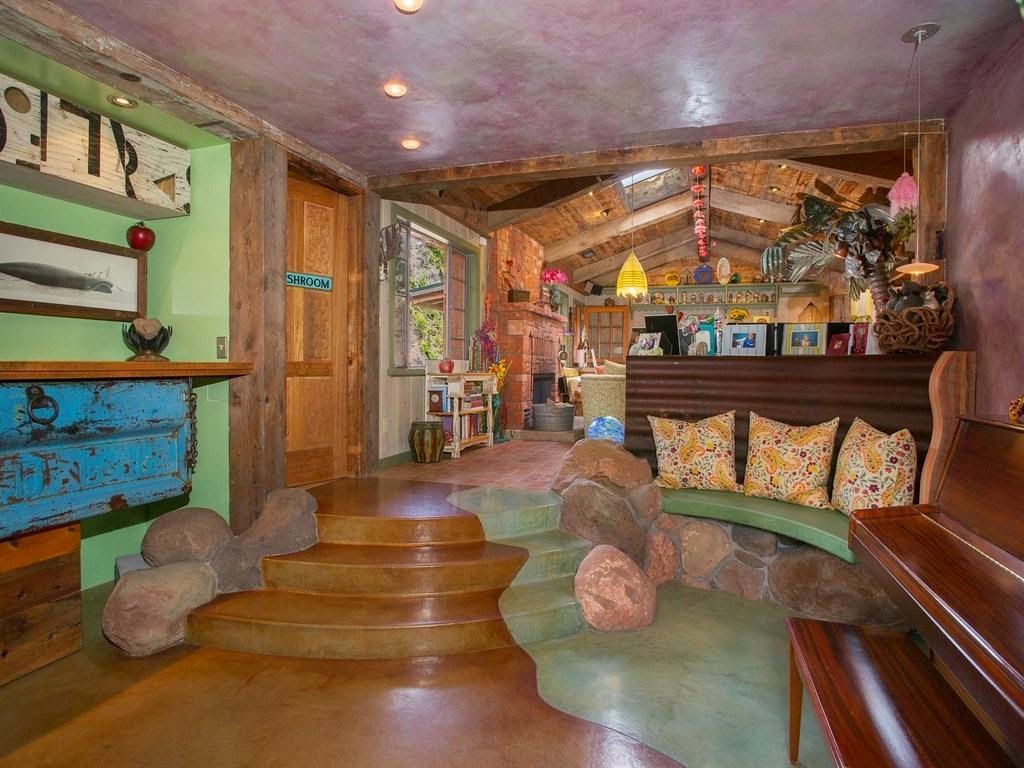 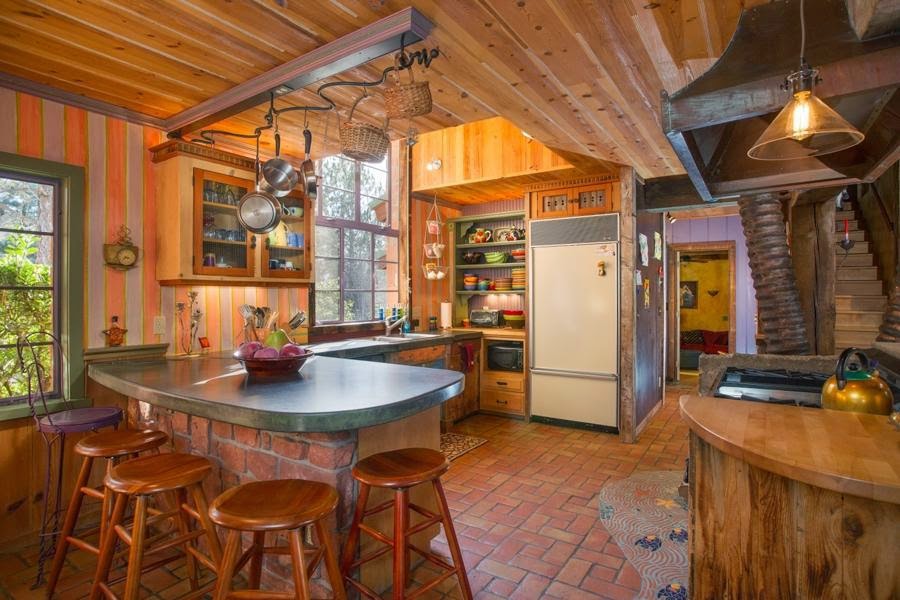 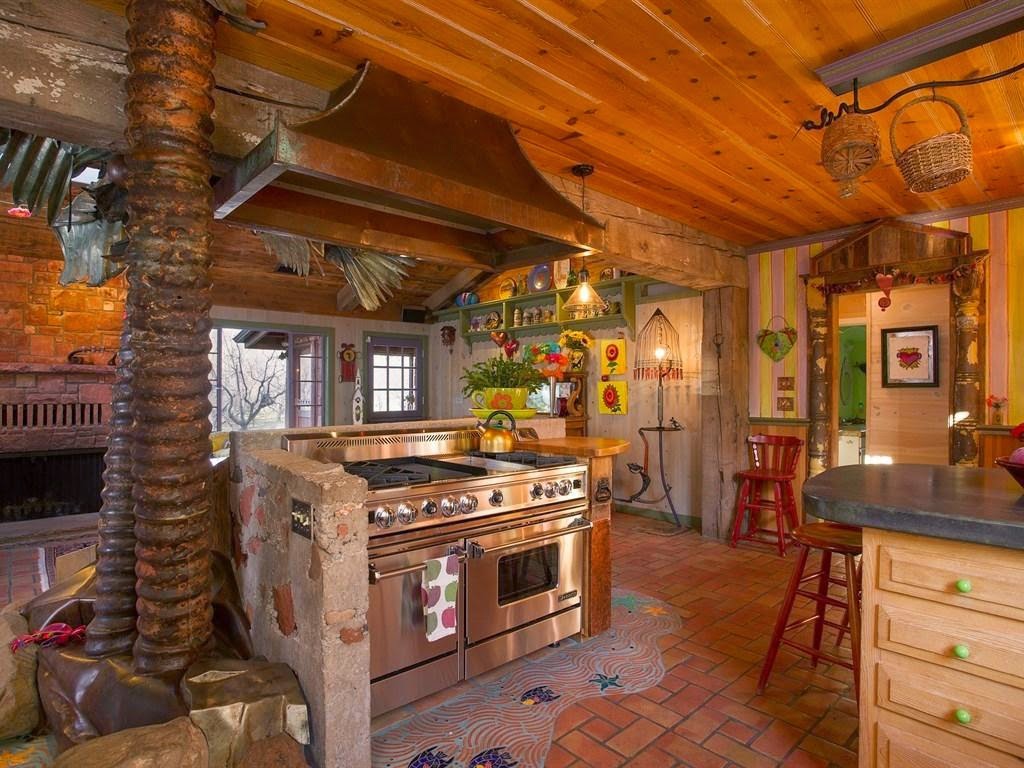 There is room on the property to add a stable for quarter horses with room for grooming, feeding, tac and hay storage. It’s high country, so it never gets too hot or cold. A dusting of snow in the winter 100 degrees in summer at most.

I’d add an “outdoor living area” for cooking in the summer with a grill cooktop, BBQ, bar and lounging area that matches the original theme of the house – red stone and copper roof. Adjacent will be an in-ground jacuzzi and swimming pool to rest my bones. We amphibious types need to bask in water (salt water is better) from time to time. Yes, it’s an apple ranch, but nobody says that it can’t be a comfortable apple ranch.

Artisan created accents and metal sculpture are integrated into the home throughout and in the clever music room hosting a drop down tailgate desk and slide out shelves. Convenient laundry room features built in storage, racks and laundry baskets. A private den/media room is secluded from the main living room which boasts a tin ceiling, gas fireplace/stove, plaster walls, stained concrete floors and custom paint. Red Rock views of Steamboat Rock and Wilson Mountain from this one of a kind master suite with a spacious sleeping space and a dedicated office area plus a playful, master bath featuring a metal sculpture commode room and a jetted spa with a porthole accent. Additional bedrooms include hypo allergenic wool carpet, a built in dresser and desk. The property enjoys ditch irrigation rights and is fenced with a circular drive leading to an attached two car garage plus a bonus equipment garage/storage building and expansive parking. Truly a rare and historic estate with an in town location, this amazing property awaits your most discriminating inspections.

The historic red stone residence was originally built in 1948 with 14 inch thick walls of Arizona quarry red stone. Then beautifully remodeled in 1980 and then again in the late 90s to modernize this home, so its effective age in the 2000s.

Store with full bath and kitchen has 1452SF+/- This allows you to sell your cider and apples in season. This can also be turned into a guest house since it is set up for that.

No Association fees
No Ditch fee
Arizona Water Co. supplies the buildings with water. The private well and ditch provide water for the 2.5 acres of land.

I already own a pick-up, a separate rock truck 4×4 and firearms, fishing tackle and can buy a canoe… How can I say no? I’d have to quit my job and my company… ;^) It’s about a 1 hour drive from prime elk hunting. I’ve been looking for a place where I can end my days in peace. This is about as close as I’ve seen to that yet.

UPDATE: A friend e-mailed me his recipe for ‘hard’ apple cider, and suggested that I could pay the rent with moonshine. A promising suggestion. He said that even if I don’t sell a jar, I could use it as a cure for rheumatism. I haven’t been struck down by that ailment. He said if I drink my own batch, I may never be. I’m left wondering if he feels that cirrhosis would take me first? He said that it might help me land a woman, which it might. Candy is dandy but liquor works quicker.

ANOTHER UPDATE: A different friend e-mailed me a list of farm animals that I would want to add to the dog and horse. I didn’t think that anything would be necessary after a man had a dog and a horse, but laying chickens sound like a good idea because I like fresh eggs.

A pig to eat the apple mash won’t work because of the update above and a better place to put it. A pig may make a fitting companion for a hard drinker but I’ve never been given to take drink in excess of a sip or two. Pigs do hunt snakes effectively but a loose pig becomes feral and you have to put it down. Pigs are destructive and are more work than I’m willing to go to. If I have a hankering for pork I can always go to the local Safeway. If Muslims move in next door, yes the pig scenario works perfectly. I’ll have 10 of them and a big sign that the neighbors can see: LL’s PIG FARM and Hard Cider Emporium.

YET ANOTHER UPDATE: No, a B & B is out of the question. Why do I want annoying strangers from the city clodding around my ranch asking embarrassing questions about the still? I have given some thought to naming the batches based on the variety of apples that go into the mix. I tend to toward the traditional:

Add some to the list as you are moved to suggest them.

Brighid suggested that it’s a cow camp in an e-mail. No, Brig, Apple Orchard, no cows. I realize that is counterintuitive to some extent, but Jerseys need to be milked and that sounds like more work than it’s worth. I may end up back at Safeway or Costco for milk.

I haven’t been a cowboy since I was a boy. Buying into a steer (half a steer) at butchering time and freezing the meat makes more sense to me than raising it, naming it, feeding it and then slaughtering it, cleaning it, butchering it, wrapping the meat and then freezing it. I fear that I’m endemically lazy. Just because I want the steak does NOT mean that I want to meet (and make friends) with the cow.

Might I possibly want to put a bass pond on the property, fed by the well? Brig didn’t ask that question but that’s about the only thing this property lacks. Something along the 1/4 acre size range? Blue gills and large mouth bass… Maybe. I’m not likely to “name” the fish and grow attached to them, the way that I inevitably do with animals. Which is why any pigs would be named Mohammed and Ali – tough to form a relationship with future bacon and chops named after Mohammed.

Nephew suggests perimeter walls. No, if you have walls, people will call it a “compound”. If it has that reputation, the police will want to raid it on general principles. If you’re running a moonshining operation, that last thing you want is a raid on general principles that will discover that you’re turning apple sauce into apple mash and hard cider.

If there is a wall, somebody will want to climb it. Better to have a couple of trained savage dogs. I may add a second and third Rhodesian Ridgeback – names will be Thor and Loki, so that I have a pack of them to take down the curious well inside the property.   Spiked collars? Possibly.

Cats? No. There will be no cats beyond skins of bobcats, cougars and lynx, tanned and on the wall or used as bedspreads. The Ridgebacks can hunt them while I’m on horseback to take down the tree’d cat. If there is a serious rodent problem, I might be persuaded to change my mind…but if they didn’t get along well with the Ridgebacks,  the cat would just be a dog hor-durvy (I think that’s how you say it in Texas and Arizona).