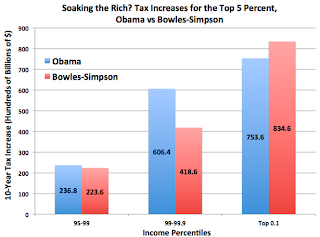 Facebook
Twitter
Pinterest
WhatsApp
How do you pay back the $16 TRILLION dollars that the government has borrowed? No matter what combination of measures you take, it’s going to hurt.
The first step is to balance the budget and control spending.
The second step is to raise taxes on ALL Americans. When you consider that the 50% who don’t pay income tax reap the rewards of the taxes that others pay — maybe it’s time to ask them to put some skin in the game too.

The Obama Plan won’t work because it doesn’t not aggressively curtail the spending that some cynics suggest is used to buy votes.

The Republican Plan won’t work because it doesn’t increase taxes, and most of us don’t think that $16 trillion dollars can be repaid by broadening the base and tax cuts.

This brings us to Bowles-Simpson.  This plan raises the retirement age and uses less generous measures of inflation when it calculates benefits on Social Security recipients. It also raises taxes significantly on the middle class, which the rich might like because it doesn’t make them feel like they’re being singled out.

Tax rates on the top .01% don’t really matter anyway because they don’t pay them. They simply move capital to a place on the planet where the tax rates are more favorable. It looks good to slam them, but collections never measure up to political hype. Both Bowles and Simpson understand this, but they wanted to make it look as if they were going to inflict tax-pain on the rich.

The middle class will have to shoulder the burden of rampant entitlements and vast borrowing by the Obama Administration no matter how you slice the pie. Both the Democrats and Republicans have to pretend as though this will not be the case because the majority of high propensity voters fall within the bounds of the middle class.