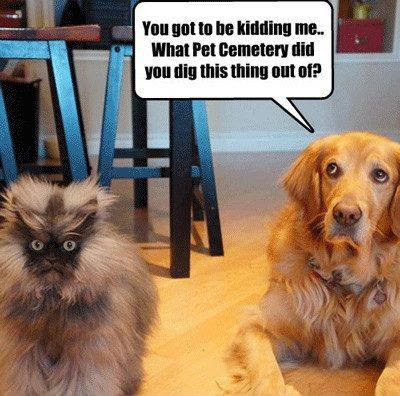 No, I don’t have a new cat. In fact, I’ve never had a cat. I’m not a cat person. I just thought that the picture was funny. If I was to get a dog at this stage of my life, I think it would be another Rhodesian Ridgeback. (right)

I had a Ridgeback (named Matt, after General Matthew Ridgeway, US Army – WW2 and Korea).

The South Africans used them to hunt lions. They love to hunt cats including cougars (not sexually predatory women, the wild kind with claws and fangs — wait —you know what I mean). Matt loved to tree cats for sport. The cats just sat in the trees and mocked him while he bayed. Then Matt lost interest, left and the cats climbed down. Occasionally he did catch a cat. Rhodesian Ridgebacks are large hounds and they are very strong. If they can take down a lion, a house cat isn’t much effort. 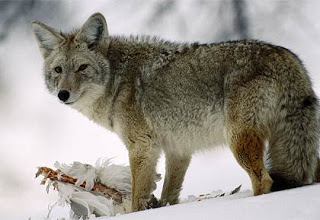 Before Matt, my Uncle John found a coyote pup on the mountain and brought him for me to raise. I named him Dusty.

As Dusty grew, his loyalty to me was beyond question and everyone in the area was afraid of him. People wondered what a coyote was doing in a (small farming/ranching) town just hanging out. He used to run next to my bicycle when I rode it. If any other boy issued a taunt, he’d bare fangs and run toward them. That didn’t happen often, but often enough that people kept a respectful distance.

Sadly for Dusty, he liked stealing chickens. I’d find a freshly killed chicken on my doorstep every day (uneaten) — until somebody took exception to that and ended his chicken killing career. Dusty was a coyote and no amount of ‘civilizing’ would change that.