White Wolf Mine (an update) 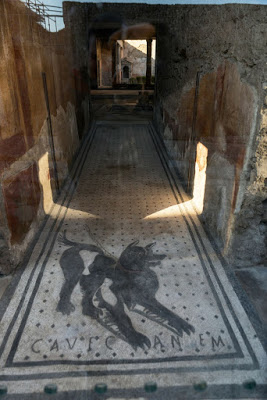 The photo (left) is of the “House of The Tragic Poet” in Pompeii, Italy. The mosaic reads “cave canem” or beware of the dog. This type of mosaic has been found around the Roman World and has two interpretations 1: a literal guard dog warning (as this one appears to be) or 2: beware of dog ( if a small dog resides in the dwelling such as a small Greyhound), be careful not to step on it.
If I lay concrete at the entrance to the mine shaft, should I do something like this, only with a wolf – “beware of the white wolf”? Maybe put a chewed up trespasser at its feet (in mosaic)?
It does detract from the rustic nature of the adit (mine shaft), but there is such a thing as improving and adding culture. Would it also be appropriate to add Roman plaster on the walls, or is that taking a good thing too far?
Linus Pauling wrote that the only way to have a good idea was to have lots of ideas. I tend to follow that school of thought.
I’m working on some of the finer details of the interior lighting, selecting ceiling fans, and doing that sort of thing. There are at least a thousand mundane details – likely more than 1000 that need to be addressed.

And while I’m coasting, picking out stuff and being very domestic, the principal masonry is complete at the White Wolf Mine. There are still some pillars that need to go up and some other masonry that will be put outside of the main structure, but there’s enough done to start adding the frame to the foundational structure. I’m very happy with the base masonry. Well done crew! 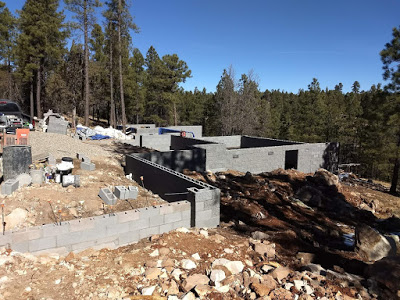 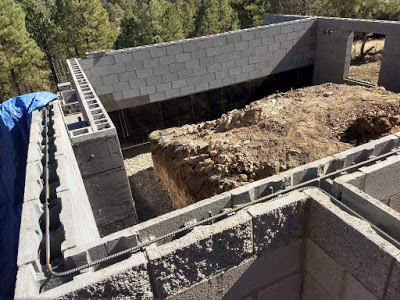 Now comes the clean up in preparation for plumbing and then the concrete can be poured.