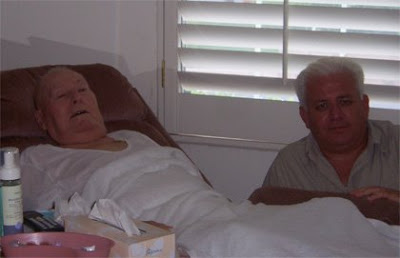 My uncle John was my grandfather’s youngest brother. He died at age 86 (in 2006) and the obituary called it correctly when they said he was, “a man of great integrity and love, whose life passion was to serve his fellow men.” Everybody who knew John loved him.

was simply that sort of man. In the photo (above), I’m visiting him at his home a week or so before he died. I traveled back for his funeral because it was important for me to honor him. He served with the US Army during World War 2 in Operation Torch – Invasion of North Africa and in the battles with Rommel’s Afrika Corps, in the invasion of Sicily and Italy and the bloody battles there.
But that’s not why I’m writing this.
There is a saying among aviators that “there are old pilots and bold pilots but there are no old bold pilots”. Uncle John proved the axiom to be wrong at least once – in his case. While he was a great humanitarian man in his post-war life, there was one place where all caution and common sense left him – behind the stick of an aircraft. I don’t know what happened during the war, but in civilian life, he crashed four times and walked away to talk about it each time. That doesn’t include the times he cracked up on landing.

He flew Helio Couriers (and crashed two in the US), dumped at least one Piper Cub. I think the other crash was an Aero Commander.
I asked him how he pulled it off. He said, “I live right.”