Every year there are carnival celebrations around the globe as spring arrives. In New Orleans, it’s Mardi Gras on Fat Tuesday. Last week I (sadly) missed the carnival in Trinidad because I was in St. Lucia when the celebration kicked off.  Talk about really bad timing on my part. Some St. Lucians, headed for Trinidad, are pictured in the photo (left) wearing St. Lucia’s national colors on their outfits.
Carnival is an excuse to play music loud, to dance and to strut your stuff. There are usually substances available as well.
In the US there is also the Burning Man in Nevada every year which boasts the same sort of vibe as Mardi Gras in New Orleans. However they try, I don’t think that the Americans who flee to the heat of a dry lake in Nevada will be able to top the languid, humid air of the Caribbean spring in Trinidad.
The St. Lucian (teams) should account themselves and their island well and all those hours of the gym will have paid off with another successful three day strut! 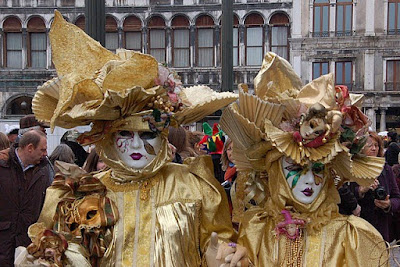 I asked friends in St. Lucia why they planned to go to Trinidad instead of the larger and even more unrestrained Rio Carnival. They cited the language barrier and the inability to speak Brazilian Portuguese as the defining reason. 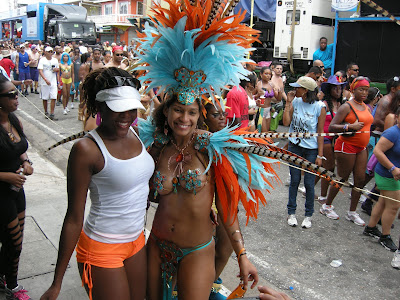 Carnival is now over, and the feathered costumes will have to be put on the shelf for another year. (The costumes cost about US$600 each and some of the more popular regae and steel drum bands can have as many as a thousand dancers, each in similar costumes following the band and dancing)