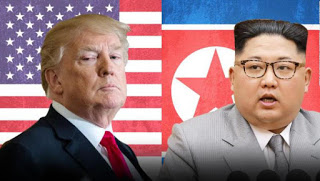 Yes, it’s could all be a ruse to lure us into a false sense of security before the Godless hoards march south. Still, it’s worth reporting that North Korea will not hold an annual anti-US rally. 25 June, is the 68th anniversary of the start of the Korean War. Usually on this date, North Korea is preparing a large demonstration in Pyongyang to protest US imperialism.

Large-scale rehearsals usually can be detected in satellite imagery at military airfields or staging grounds near Pyongyang. No sources have reported demonstration preparations.
North Korean media also have published no anti-US rants, which set the tone and provide the themes for the anti-US demonstration.
Open sources reported no North Korean statement about the anniversary. Chairman Kim (Little Rocket Man) Jong Un is keeping his pledge to create a new era in relations with the US, at least in terms of the atmosphere.
North Korean media have published no anti-US commentaries in a month, since 24 May when the US President sent his letter canceling the summit. The cancellation of the annual rally is a significant symbolic, cost-savings decision. It is related to atmospherics, however, not denuclearization.
As for large celebrations, Kim Jong Un plans a huge celebration in September in honor of the regime’s 70th anniversary.
Ramadan has Ended

The Afghan Defense Ministry reported that the Taliban have surged attacks in 10 of Afghanistan’s 34 provinces in the past four days. The Taliban announced that they have launched new attacks in 15 provinces.

Remind me why were there propping up a puppet dictator.
Iran
Marchers in Tehran protested economic conditions. Thousands of Iranians marched in Tehran and other cities to protest economic developments. Businesses in the Grand Bazaar in Tehran joined the protests and closed the bazaar. Others protested in front of parliament.
Most urgent is the fall in the value of the rial. In the unofficial market one US dollar is exchanged for 90,000 rials. The official rate is 42,000 rials to the dollar.

The second issue is the rise in prices. The collapse of the rial drove up the price of everything. This has generated capital flight as well as increased pressure to convert rials into dollars or durable goods.

Businesses dealing in imports suffered a second major setback. In anticipation of unilateral US sanctions in August, the Iranian government banned the import of more than 1,300 goods that could be produced in Iran. The banned items include household appliances, some textiles, footwear and leather products, as well as furniture, healthcare products and some machinery.
The head of the Chamber of Guilds assured the press that business had returned to normal at the Grand Bazaar by day’s end.
These were not anti-government protests in the sense of calls for systemic change. The protestors were merchants who sought economic relief, which has been promised by successive Iranian governments.
The involvement of the merchants is particularly challenging to the government because they are the conservative pillars of the consumer economy. Businessmen and professionals have a large stake in stability, and they do not put it at risk by political activism. Their decision to protest in public implies that economic conditions are serious.
Iranian press reported that no protestors were arrested, though police dispersed the crowds. A key development will be whether the government begins to treat economic protests as challenges to its political authority. If, or perhaps when, that takes place, that would be the turning point when the protests convert into anti-government protests.
Syria

The rebels surrendered in one of the southwestern operations areas. Several Syrian news services reported that most rebel groups in the Lajat area, northeast of Dara’a surrendered to government forces on 25 June. Major elements of an armored division were in position to dissect the territory held by the rebels, applying the siege and squeeze tactics used in the eastern Ghouta operations.
Pro-government sources said that 900 former opposition fighters joined the Syrian offensive to fight the HTS and the Islamic State remnants.
The HTS, formerly the al-Nusra Front and affiliated with al Qaida, tried to prevent the surrender by attacking government troops. Russian and Syrian air attacks helped defeat the HTS counter-push.
The surrenders partly avert a humanitarian crisis. The Russians said they would escort three relief convoys into the area.
The liberation of Lajat shrinks by about one-third the area under the control of anti-government fighting groups in the southwest. The pro-government web site South Front posted a map that shows the Islamic State fighters control one of the remaining pockets. That pocket is located in the tri-border region of Syria, Jordan and the Golan Heights.
Jordan
Jordan announced it will accept no more Syrian refugees. On 25 June, a government spokesperson announced that Jordan will not accept refugees fleeing the current Syrian army offensive in the southwest. In the statement, the spokesperson said Jordan had accepted many refugees but could take no more.
The statement about refugees is intended as a warning to Syria to minimize the civilian ripple effects of its latest offensive.
Jordan hosts 660,000 registered Syrian refugees, which is almost 7 per cent of the population. However, experts judge up to 1.4 million displaced Syrians are in Jordan. A major concern is the extra strain on Jordan’s water supply and on the economy in general, according to reliefweb.
Without major outside support, Jordan could not support the burdens of the large refugee population. Historically, refugee burdens have prompted border closures and have contributed to clashes and general war.
If Jordan is serious about not accepting more refugees, it might be required to back up its statement with a show of force.