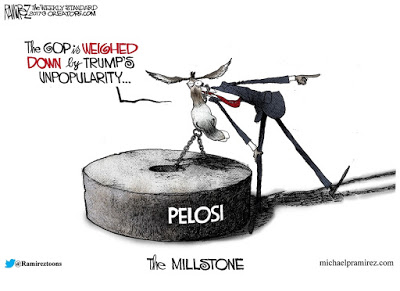 Facebook
Twitter
Pinterest
WhatsApp
Keep Pelosi
I agree with many that Rep. Nancy Pelosi (D-CA) is doing a wonderful job as House Minority Leader. She needs to be retained and the strident calls for her replacement by certain malcontents need to be crushed.

Anyone who disagrees with me is a misogamist, is against gay rights, and may also be a racist because Pelosi is a member of…a race. They also must hate old people (Pelosi at age 77, showing some signs of dementia) if they want Nancy Pelosi out of government.
She’s not even as old as Joe (Slow Joe) Biden, who is 74, and has been a candidate for a nursing home for a couple of years now.
Age haters need to be destroyed.
Torched Reporters
(LINK) CNN announced on Monday afternoon that three network officials are leaving their jobs over the incident: Frank, the reporter on the story; Eric Lichtblau, a recent CNN addition from the New York Times who edited the piece; and Lex Haris, the executive editor of “CNN Investigates.” The moves follow an investigation carried out by CNN executives over the weekend, with the conclusion that longstanding network procedures for publishing stories weren’t properly followed. “There was a significant breakdown in process,” says a CNN source. “There were editorial checks and balances within the organization that weren’t met.”

As an aside, I first met Erick Lichtblau at the start of his career l when he was a brand new cub reporter for the Los Angeles Times doing political corruption and organized crime stories. He trained at the feet of George Frank, a reporter of great renown – truly.  Eric, if you read this story, think back to your beginnings and ask yourself who you learned from and what they would think.

There’s nothing quite like going back to a place that remains unaltered (even if only in memory) to find how you have changed. That’s all that I have to say except that I expected better of you. 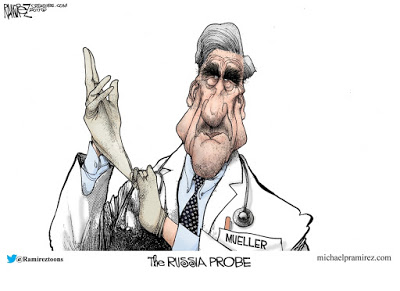 Robert Mueller has an opportunity to be a hero or a zero, and the jury is still out on the “foolish” Russia probe. He’s hired a lot of cronies to help him come up with a decision (which will be made by committee to defray any personal accountability for an F-up).

However, let me take a moment to point out that a screw up on Mueller’s part is a black eye on the FBI. I realize that he hasn’t been the director for a long time now, but it’s a crony operation. Despite how the corrupt, elite, lying mainstream media tries to spin it, the FBI and their already damaged reputation will own it. If he does an honest job, it may help the FBI. If he doesn’t, they’ll be diminished even further.