Facebook
Twitter
Pinterest
WhatsApp
President Obama, in his effort to stimulate the economy is finding success in solar energy where his supporters contribute to his campaign financially and in return they get vast sums from the federal treasury – which they blow on cocaine, expensive liquor, women of questionable repute, jets, yachts and fact finding trips to Europe and the Caribbean (sounds like Congress doesn’t it?).
But that’s not the only thing that the president is doing. It’s not the only place where his efforts are bearing fruit to improve our tepid economy.

Hornady, an ammunition manufacturer with a reputation for sound and effective products addressed the current unheard of demand for ammunition:

“The current political climate has caused extremely high demand on all shooting industry products, including ours,” Hornady said in the statement. “Empty retail shelves, long backorders, and exaggerated price increases on online auction sites – all fueled by rumors and conjecture – have amplified concerns about the availability of ammunition and firearms-related items.” (guns.com)

Q: Have you stopped production, or has the government forced you to stop?
A: Not at all.
Q: Did you stop selling bullets so you could only make loaded ammunition?
A: Absolutely not.
Q: Since we can’t find your product you must be selling it all to the government.
A: Nope, less than 5 percent of our sales are to government entities.
Q: Why can’t you make more? Ramp up production? Turn on all the machines?
A: We’ve been steadily growing our production for a long time, especially the last five years. We’ve added presses, lathes, CNC equipment, people and space. Many popular items are produced 24 hours a day. Several hundred Hornady employees work overtime every week to produce as much as safely possible. If there is any question about that – please take a tour of the factory. You’ll be amazed at what you see.

The uber liberal publication, USA Today, is lauding President Obama’s efforts to sell every last round of ammunition that can be produced.

(USA Today) We absolutely are in uncharted territory,” said Larry Hyatt, of the family-owned Hyatt Gun Shop in Charlotte, N.C.. “Our store is 53 years old, and we have never seen anything like this. We have had some spot shortages and busy gun times in the past. This is a level (of demand) never before seen.”

He adds: “The political turmoil is intensifying it. People feel like this administration is very anti-gun, and they are going for the legal gun owner.” Among the rumors he hears, he says, are that taxes on ammunition are going up and that background checks for ammunition purchases are coming.

“Whether true or not, this information is out there, and people are getting it while they can,” Hyatt says.

He is limiting sales of .22-caliber to one box, and is running low on everything from holsters to cleaning brushes.

Mike Wastler, manager of Bart’s Sports World in Glen Burnie, Md., says he is also having trouble getting guns and ammunition from manufacturers who are “producing 24/7.”
He says that even before Obama’s re-election there was rising demand from people worried about economic chaos. Sales “went crazy” after Obama proposed banning assault weapons, he says.

Wastler says certain types of .22 shells are “non-existent” in his store, and that others, like 9 mm, and .40 and .45 caliber are “very, very short.” So are replacements parts for guns, he says. 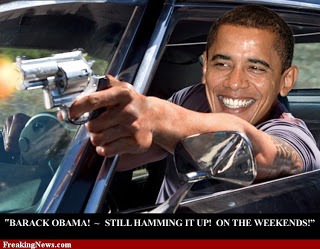 When you hear people beating the president up over his support of tens of billions of dollars being shuffled off to his campaign contributors in their wild “green business” schemes, bring them  up short for two reasons. (1) Obama built those failed businesses through his loving patronage and (2) The president is supporting conservative ammunition and arms sales which are blooming at an unprecedented rate — he built that too.
In fact, if I made firearms or ammunition, I might be inclined to vote my pocket book — for Obama. He is the savior of the ammunition business in America.