Not a BAR (Sunday Sermonette)

Facebook
Twitter
Pinterest
WhatsApp
Not exactly.
John M. Browning designed it and Colt’s Patent Firearms Manufacturing Company built the Browning Automatic Rifle, which saw brief service in World War One, and entered the military inventory.
After the war, the police found a need for something more. Yes, they had Thompson submachine gun, which fired a .45 ACP cartridge, but the cars that Detroit turned out were made of sterner stuff than they are today. The .45 ball ammunition of the day did not always provide the penetration that the police needed.
What to do?
Colt and FN Herstal came up with a solution: The COLT MONITOR R80 Automatic Machine Rifle.

The lightened and shortened version of the BAR, now called a Monitor, equipped with a muzzle break and a pistol grip, firing the .30-06 cartridge would put a round through-and-through the car including the engine block and its occupants with ease.

On May 23, 1934, the careers of bank robbers Bonnie Parker and Clyde Barrow were concluded through the use of the Colt Monitors (in part) when they were shot to death in a police ambush as they drove a stolen Ford Deluxe along a road in Bienville Parish, LA.
These days you hear the odd complaint about the police becoming too much like the military with armored cars and semi-automatic carbines like the M-4 and Ruger Mini-14. However there is a historical precedent for something much more robust.
I can only imagine the reaction of the inner city if law enforcement reverted to the golden age of police work (where the badge said POLICEMAN, not POLICE OFFICER) and they had Monitors available.
Can you outrun the long arm of the law? It is more difficult if the long arm of choice is the Colt Monitor. Thus ends your Sermonette. 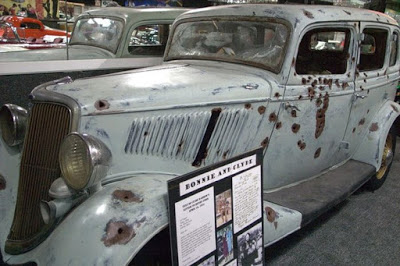