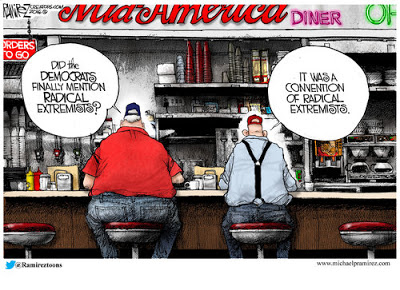 ONE – I was a good sport when the Republicans ran Bob Dole, John McCain and Mitt Romney. I liked Mitt, but wasn’t sure that he would have been a great president. Anyone who shops at Costco with is wife, makes breakfast for his family and irons his own shirts even though he’s a zillionaire has my attention.

Now that Trump is the nominee, I expect all of the babies who wanted me to swallow my angst and vote for their dubious (losing) candidates, to suck it up. That includes you McCain, who didn’t show up at the RNC but still want my vote to put you in back in the legislature one-more-time. Arizona might welcome a new face in Washington DC.

These “never Trump” types who want Hillary to win so that they can go out and raise money from the mooches to “defeat Hillary”, need to be tarred, feathered, and run out of town on a rail.

TWO – I didn’t like the Black Panthers and I don’t like blacklivesmatter because they’re race-baiting bullies. They have their origins in Marxism, which means that they want to be paid to shout and march. There is constant talk in their ranks of a race war. If they want a race war, fine. I’m ok with that. I really am. It will be a short war. I like the target practice that moving targets bring. I wouldn’t feel any remorse as I do when I kill an elk. Anyone who gives in to the BLM tactics or encourages them further is a turd.  I guess that makes Barack a turd, doesn’t it? Right along with the mainstream media.
During the Watts Riots my grandfather handed me a rifle. He said, “remember when you killed that buck (deer) (at age 7) in Arizona?” I said, “yes”. He said, “This will be easier, and you’re good with head shots.” Portents of a lifelong career, but BRING IT, blacklivesmatter. Don’t just chant about it. Don’t be pussies. Put Barack and his buddy Sharpton out in front of the mob. Let’s see how much spine they have.
Sharpshooters will engage at 1000+ meters and those of you who don’t shoot so well, wait until you see the whites of their eyes.

THREE – If the nation wants to send young men and women, and I guess these days also the gender confused, into combat, they/we must take care of them once the toys are broken. It’s not a joke, it’s not something that politicians should have an option on. The VA bureaucracy works in some places but by in large, it’s badly broken.

I’ve been to the VA in Long Beach, CA and vowed never to return.

Thankfully I have the means and insurance that it is not necessary but there are a lot of people who are not as fortunate as I am. That includes dealing with mental health issues that impact veterans – in a MEANINGFUL WAY. (LINK). I had a son-in-law who came back from Afghanistan seriously pranged and the US Navy did an ADMIRABLE job helping him re-thread his bolt. But it wasn’t a gift. They OWED him. And we owe veterans. Society owes the pajama boys, the welfare queens, wet backs (illegal aliens/undocumented guests) and the inner city thugs nothing.

There’s a young man who lives not far from me who lost both hands and arms up to his elbows in Fallujah and had much of his face blown off, his hearing is gone and the military has generously awarded him 50% disability on his Marine Corps (E-2) private first class pay grade. His face (looks like somebody put a fire out on it with a wet chain) was repaired with plastic surgery and his arms now are stainless steel with hooks on them. He was not blinded but wears cokebottle glasses now. We give him $10,400 per year to get by. At $7.25 an hour, the national minimum wage, A full-time minimum wage employee earns $15,080 annually. In California, living on $10,400 a year makes you substantively homeless.