Home Blog Post The NEW Acorn...
Facebook
Twitter
Pinterest
WhatsApp
As you all may know, ACORN is more or less dead. However, has the phoenix risen from the ashes? Somebody call Glenn Beck!
Over the last four days, yellow shirted volunteers, many thousands, formerly employed by ACORN, gathered together in Las Vegas, Nevada at the Las Vegas Convention Center to move forward with the new ACORN, called:
CAHO
Community Advocacy and Homeownership Organization
What were they discussing in the convention? (CLICK HERE)
And in case the link goes dead, here is their press release:

– Las Vegas is the next stop of the Neighborhood Assistance Corporation of America’s (NACA) nationwide Save the Dream tour. It is coming to the Las Vegas Convention Center on Friday, October 9, through Monday, October 12, 2009.

What: Press conference to launch the Las Vegas event
When: Thursday, October 8, 1 p.m.

Where: Las Vegas Convention Center, North Hall 3 and 4
This is the third city in the Western U.S. leg of the NACA tour. Los Angeles, the first city on the

Western U.S. tour, drew more than 50,000 homeowners looking for mortgage restructuring relief, and the second city, Phoenix, drew approximately 40,000 homeowners.
NACA provides a free effective solution for at-risk homeowners with unaffordable mortgages by permanently reducing the interest rate often to 4%, 3% and 2% and, if necessary, reducing the outstanding principal to what homeowners can afford. NACA can do this because it has secured legally

binding agreements with most of the major lenders and servicers, which covers 90% of the at-risk homeowners.
‘Our thousands of volunteers work with homeowners at the event to prepare a budget that verifies and documents what the homeowners can afford. We then present these documents onsite to our over 200 bank representatives for approval,’ said Bruce Marks, CEO of NAC

A. ‘Many attendees of the Save the Dream tour events come away with a lower monthly payment and sometimes a lower principal. As our tour generates more and more interest, the banks are more willing to cooperate with us which really helps these troubled homeowners.’
Over 230,000 participants have already participated in NACA’s Save the Dream tour in Cleveland, Chicago, St. Louis, Atlanta, Los Angeles and Phoenix, providing same day

solutions to thousands of homeowners, helping to avoid foreclosure, restructure mortgages, and reduce interest rates. Click here for media coverage from all the previous events.
The incredible success of NACA was also featured recently on national television. Click here to view ABC News Nightline feature on NACA’s Save the Dream tour. The feature went on the frontlines with NACA CEO Bruce Marks, ‘a man trying to restore the American Dream.’
All of NACA’s services are free. Homeowners drive and fly from long distances to attend these extraordinary Save the Dream events. The last stop on NACA’s Western U.S. Save the Dream tour is

the San Francisco Bay Area on October 16-20.
Anyone interested in attending the Save the Dream event Friday,

October 9, through Monday, October 12, at the Las Vegas Convention Center should pre-register for an appointment at NACA.com (https://www.naca.com/members/keepInform.jsp?formType=campaign&campaignID=LV&campaignTitle=Las%20Vegas,%20

About the Neighborhood Assistance Corporation of America (NACA

):
Founded in 1988, NACA is a national non-profit community advocacy and homeownership organization headquartered in Boston. Through its 38 offices nationwide and

two call centers, NACA has set the national standard in restructuring thousands of mortgages to what the homeowners can afford, as well as providing the best mortgage in America for homebuyers.
News of NACA’s program and advocacy has been featured in nation

ational and local media. Boston Globe chose Bruce Marks, founder and CEO of the Neighborhood Assistance Corporation of America (NACA), as its 2007 Bostonian of the Year. There is tremendous recognition for the effectiveness of NACA’s advocacy and for providing re 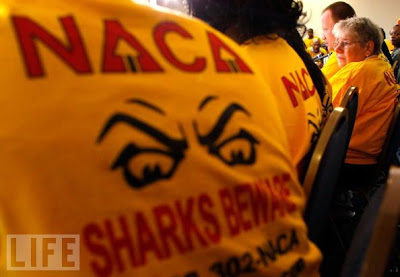 From what I can determine, CAHO is a spin-off from NACA, and if it’s not the new ACORN, it sure LOOKS like the new ACORN.

The people attending the convention wore the yellow shirts of NACA, but the acronym was CAHO.