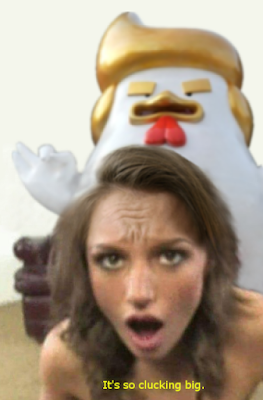 Facebook
Twitter
Pinterest
WhatsApp
OPLAN 5027
(Wikipedia) It began about two months ago with the US quietly moving pieces around the chessboard to be prepared for a North Korean attack on South Korea, Japan, or US Territories (Saipan, Guam, etc.) The OPLAN is in its essence, a logistics activity in its initial phase(s) The military calls it the “Time-Phased Force and Deployment List,” or TPFDL.
It includes moving anti-ballistic missile assets to places where they will be needed and to pre-position US aircraft to strike North Korea. I don’t know how close to complete the US is and wouldn’t write it down if I knew, but we all have seen this coming and the Pentagon started the ball rolling some time ago.
The Trump Chicken
The liberal move to try to embarrass President Trump failed again, as the president accepted the logo.
Have a great Friday and a glorious weekend.