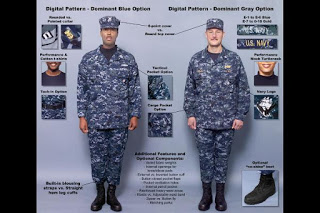 Facebook
Twitter
Pinterest
WhatsApp
The Navy has announced  yet another working uniform (Navy Working Uniform 3, or NWU-3). Before I get to that, let’s review the Navy’s current working uniform for those of you who may not be up to speed. The navy transitioned from its traditional working uniforms, wash khakis for officers, warrants and chiefs and dungarees for other enlisted, to a blue camouflage scheme. Cynics suggested that the only value in camouflage blue was in the event you were washed off the ship at sea and there were claims that they couldn’t find you when they looked because you were effectively camouflaged.
WHY DOES A NAVY NEED a camouflaged working uniform for on ship in port? What possible value is ‘blue camouflage’?  My sense was that somebody really high up was smoking something that the navy prohibited, but who am I to judge – an old salt who harkens back to the simpler days. 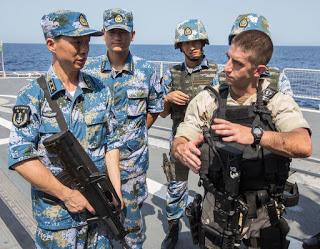 Are the Americans trying to keep up with Chinese fashions? In the photo (right), you will see members of the People’s Liberation Army’s Navy in their blue camo, standing next to an American naval officer.
Since the US Navy is now adopting a green woodland camouflage working uniform for service aboard ships (yeah, crazy, right?), for the sake of economy shouldn’t they adopt the same camouflage uniform used by the United States Marine Corps (MARPAT, or Marine Pattern)? Uh, no, it will be a DIFFERENT green (NWU-3) woodland camouflage uniform or brown/tan camouflage uniform (NWU-2) than the one worn by Marines (Naval light infantry).
These are cloth swaths: 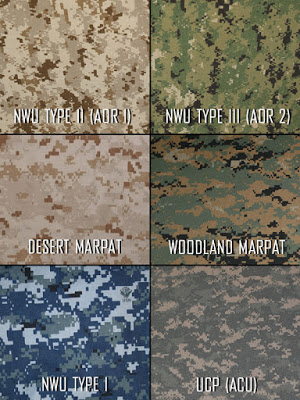 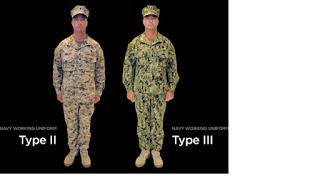 If you’re asking yourself whether or not the Navy has gone insane, the question is well founded. I suspect that in four or five years, when another admiral is in charge of uniforms, you’ll see yet another change. For now, when you see somebody wearing one of the two uniforms (right), they’re not soldiers, marines or airmen, they are the US Navy. Does the Navy feel that the camo will hide the sailors on ships from enemy detection?
Somebody mentioned the SEALs, and their need for new Navy uniforms. Just a word of practical advice.
(Warning! If you’re an admiral, stop reading here)
The SEALs wear any sort of uniform that they want to. During Gulf War 1 (Desert Storm), we wore Marine Corps uniforms without the name and service strips over the pockets because they were available and the issue of the old desert popcorn style uniforms was slow in coming to the theater. It mystified the Marines particularly because nobody wore rank or saluted, said “hi” and used first names — but the Navy didn’t care. SEALs decide what works best for the circumstances and wear that. Will they wear the new uniforms? Sure, sometimes. The uniform of the day on base is swimmer shorts, a blue an gold swimmer shirt and sandals, and nobody salutes, but they do say “hi” and use your first name.