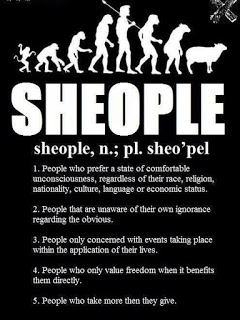 We created this worker’s paradise when we became Sheople, and the greed of the common man overcame his willingness to work for the good of all. The myriad of labor unions and the Party itself formed a living, breathing thugocracy that existed to serve its own ends.  We were divided and then we were conquered by our own.
Ehigie, called Eggy, ran Rubin’s Deli, the Rubin family having moved on two decades previously. He hailed from Nigeria and didn’t talk much about his life there. Eggy didn’t talk much about anything. People rarely came to the deli because he served Nigerian food and there were very few Nigerians in the city.


Dewey thought that the local politics were foolish. Eggy didn’t talk to Silky Jackson, who ran Girls-Girls-Girls because Silky was a high yellow negro and Eggy’s skin was so black that very little light reflected, at least that’s how Dewey saw it. It turned out that the strip bar that Silky built near his dining establishment had offended Eggy’s sense of modesty. People misunderstood race to mean agenda.
As I mentioned, Nelson Begay ran an Indian restaurant – Not a restaurant serving East Indian food. Nelson served southwestern cusine because he haled from Gallup, New Mexico, not from Bombay or Calcutta.
And me? When Tambunga told me about the Wilbur Quail abduction, I became as alert as a mouse at a cat show. When had Wilbur been abducted? Marie Watts almost raped me after work a week ago, probing about what I knew about what. Marie was the station clearing barrel, and a tool of upper management. The term clearing barrel refers to the red, sand filled barrels used to verify that small arms are unloaded before turn in. Police officers preparing to turn in weapons line up and dry fire their rifles into the barrel. Some called her the ‘department groundsheet’. The presence and agenda of Marie Watts made me wearily contemplate some idiotic or malicious decisions by higher-ups. She never appeared unbidden. But maybe, just maybe it had something to do with Alderman Quail.
Advanced as we had once become, we were hurtling backwards into a new dark age. I saw it every day, felt it with every sunset and retrospective glance at the day before. In the story of A Connecticut Yankee in King Arthur’s Court, the main character, Hank Morgan, a mechanic in an arms manufacturing plant woke up one day in King Arthur’s England. He did everything that he could to advance the backwardness of the peasants and royalty alike, but in the end it all came to naught, as the people were forgetful and more comfortable in their ignorance. All of the advancements he made to the civilization in which he found himself were wasted, and there’s the nugget of truth for today’s civilization. Perhaps it had something to do with the end of reading as a pastime. People preferred to be force-fed trivia through video screens and pads. Electronic games replaced learning by offering endless entertainment.

We put ourselves in the same place that the Roman Empire found itself. The people who built and forged the institutions that made the nation great had long been dead by the end. Men like Scipio couldn’t reach out and teach the later offspring about life and how to wage war. Adaptation to the police state and thugocracy that I myself perpetuated was easier than struggling to keep things strong. Values were replaced by emotion and unbounded greed. It had become greed, more than anything else that bound the society. Every institution in the country had become corrupt at the Party’s urging. We became slothful, and failed in our basic responsibility to the generations to follow. A nation built upon optimism and faith, which sloughs off its beliefs will descend into hedonism, decadence and fatalism. And some operative in police management sent Marie Watts, the clearing barrel, to me to seduce information out of me that I didn’t have. It’s simply how things were done now.
Of course, I knew who had Wilbur Quail on ice. Who else? John Dewey had authored a training course on planned political kidnapping, he had a secret room under the Third Interstate Bank and he sat on a pile of cash from the armored car heist. He had the motivation, the skill and the bankroll along with the natural vindictiveness that all police officers harbored toward the politicians who treated us like servants or pawns in their power struggles.
This concludes the fictional short. Let me know your thoughts as to the potential of a novel. Would you read it? Would you pay $3.00 for the completed work on Kindle? Or are the endless hours of toil that I’d have to put into this sort of creation not worth the price of a hamburger?