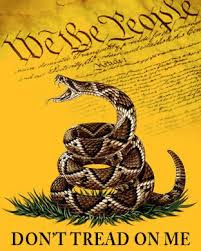 Does flying an early national flag fall under the First Amendment’s right to free speech? These days many people say, that it does not.

Should you buy and fly the Gadsen Flag?

If you Google “Gadsen Flag” you will see a lot of prog images that deface the Gadsen Flag. Apparently the flag offends delicate people who want to see the Constitution replaced with a “living document” that can change with a whim. Clearly there are US politicians who would like to change the law (only as it applies to them) every time it’s useful to do so.
Some prominent Afro-Americans believe that the Gadsen Flag symbolizes enslavement of negroes and the news reference above suggests that if you fly the flag or wear something that conveys the message, you are a racist. I will go so far as to suggest that in the modern context, displaying the flag may also mean that you’re Islamophobic, homophobic and maybe even ophidiophobic.

Editor’s Note: There is also a fictional phobia to describe the very specific fear of being chased around a table by timber wolves on a freshly waxed floor while wearing socks – it is called Luposlipaphobia. People who suffer from this fear are advised to leave this blog seek their safe space immediately.

Will it ever become tacitly illegal to fly the Gadsen Flag in America? My sense is that it may. Clearly there are people who are disturbed by history behind the flag. It was flown by patriots in the Revolutionary War that freed America from Britain – so the Brits should hate the flag, but apparently these days they don’t. It’s not the British, who have the most cause to object, who are angry and crowing.

The US Navy adopted their version of the Gadsen Flag as the first Navy Jack. In 2001 after the terrorist (or workplace violence) attack on the World Trade Center, the Navy began to fly the flag on the jackstaff of warships once again. That practice ended when Barack became president and the War on Terror shifted to become a “Foreign Contingency Operation”. Yes, it’s clearly Islamophobic. 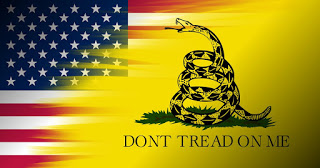 There is precedent for suppressing this sort of thing. If you recall the IRS Targeting Scandal, the President of the United States directed the Internal Revenue Service to target organizations with “Liberty, Patriot, Freedom“, etc. as part of their name. Anyone who advocates Freedom is clearly a racist. The same could be said of somebody who thinks that liberty is important. Those same people are likely Islamophobic as well.
Since the US Tax Code is 78,608 pages long, a canny IRS agent can find SOMETHING that everyone is doing wrong. It becomes the ideal vehicle to use to suppress people who may not agree with the president’s “progressive” agenda.
Many Afro-Americans feel that since some members of the Tea Party flew the Gadsen Flag at its rallies, and many Tea Party members were white, the flag is inherently racist. 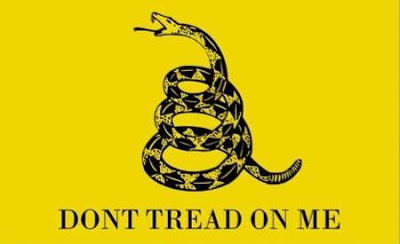 No longer politically correct.
Flying this flag or displaying this image may constitute micro-aggression
Is there still that phone number at the White House where we can call up and denounce people who are politically incorrect or “fishy” as Barack termed it? Are progs ichthyophobic? When Barack first announced that program, I called the number and ratted out California Senators Feinstein and Boxer but never received the promised payment or tax-exempt status.  Frustrated, I denounced film maker Michael Moore as a person harboring secrets. Still no cash payment from the Obamanation.
As a post script, I was offended when the progs displayed the Palestinian Flag (the flag of a nation that promotes terrorism) at the Democratic National Convention. News commentators at the time commented that the flag of a terrorist state (run by Hamas – please don’t call it Ham-Ass) was politically correct. (War is Peace,  Freedom is Slavery, Ignorance is Strength)