My Cracker in the Soup (Syria) 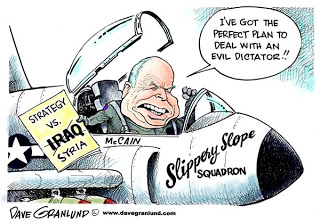 Facebook
Twitter
Pinterest
WhatsApp
The history of predicted accuracy when it comes to chem/bio weapons has been notoriously poor. The US used the weapons-of-mass-destruction pretext for an invasion of Iraq in 2003 and ended up with egg on its face. Lethal gas kills effectively. There are no large numbers of people left alive and suffering. Victims die by the thousands. Survivors are few, if any. That is the lesson of Iraq’s use of such weapons at Hallabjah against the Kurds and later against the Iranians. Casualty reports from Syria are precisely opposite of the lethality pattern in a chemical weapon attack. That doesn’t mean that gas wasn’t used — but it suggests a flaw in the pattern that should be examined before we start shooting at people.
The Geneva Convention does not prohibit the use of all gas weapons. The Russians deployed a chemical agent in 2002 when Chechen terrorists held more than 700 Russian hostages in a Moscow theater. Their crowd suppression agent that killed 116 people, but enabled 650 to be rescued. The agent is not banned by the Geneva convention on chemical warfare. If the Syrians used such an agent, which can be delivered by mortars, artillery and (Russian) aircraft, there would be no international legal justification for attacking Syria based on the Geneva convention. Did the Syrians use a chemical agent (of Russian manufacture) that was not banned? It would be nice to know that answer. Does the Obama Administration have that answer? I don’t believe that they do. Try harder.

However, by all accounts (blasted out by the press), the US plans to attack in a war that is more existential than real. We do that a lot — and it never ends well. Not ever. Not once. We’re going to stand of and blow things up in Syria without any concept of ‘end game’ — because only Sen. John McCain (R-AZ) wants to see the Muslim Brotherhood in charge in Syria based on my observations. At least he’s been the only one trumpeting it. The US is briefing the press and the Syrians, by extension for arcane (weird) political purposes. Possibly to have the Syrians evacuate the targets we have in mind to avoid a loss of life. I thought that the purpose of war was to take life. Silly me.
Iran is heavily invested in the survival of the Assad government in Syria so US and NATO planners must plan for retaliatory attacks in Western Europe, in the US, in the Persian Gulf states and everywhere the Iranian Revolutionary Guards Corps Quds Force has a presence.
The Europeans are a paper tiger. In Libya and more recently in Mali, Western European air forces were unable to sustain combat flight and logistics operations without comprehensive US support, from intelligence to mission planning to all types of resupply. Some US military personnel are resentful because they received so little recognition for so much effort to compensate for European NATO lack of capabilities. NATO is incapable of sustaining any but the most elementary level of air combat for a minimal amount of time without comprehensive US support. That means the feel-good notion of a coalition of the willing is actually a cover term for US military operations with minimal NATO help for window dressing. This is not a criticism, it is a fact of European economics.