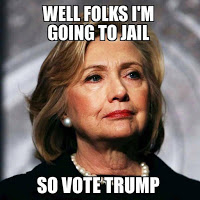 We all know that Hillary and our betters set themselves above the law, so this may not matter.

To say that the 2016 election is unprecedented is to understate the obvious. To suggest that the Democrat Party is regretting fixing their nomination for Hillary Clinton is also an understatement. Bernie Sanders might have pulled it off even though he was an old communist. He wasn’t corrupt and he was sincere. 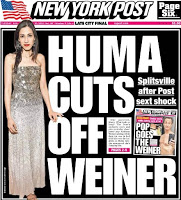 I don’t think that Huma will take Anthony Weiner with her when she joins Hillary Clinton in exile – nor do I think that there is a seat for Anthony on Bill and Hillary’s Gulfstream.
The funniest thing about all scandal is that all that Barack said about Hillary in 2008 when he ran against her was so absolutely correct. It may be one of the few times that he was proven to be accurate in his political career. 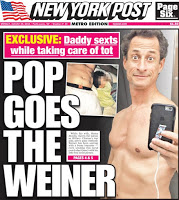 Maybe those include some of the 30,000 e-mails that Hillary Clinton “destroyed”… Will history show that disgraced former US Congressman and New York City mayoral candidate, Anthony Weiner saved the republic (in a round-about way)?

We will have to wait and see.

If you look at the headline pages over at any of the Ministry of Truth outlets (NBC, ABC, CBS or CNN), there is scant coverage of the scandal. Then again, why would there be since they’ve avoided covering any of the Clinton scandals from the beginning. 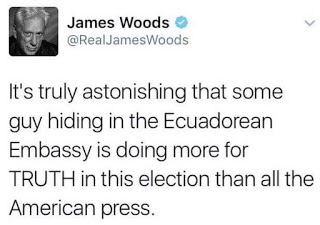 WikiLeaks is getting ready to release yet more damning e-mails. Assange contends that the next round will land Hillary Clinton in custody – but such assertions have been made before and Clinton made good her escape on her broom.
The WikiLeaks team has done more to pull back the curtain on the depth of corruption among the American political elites (and in their own words) than anything else possibly could. Even though the e-mail was hacked, we owe them a debt of gratitude. Whether or not we as a nation are able to do anything about removing the cancer is another issue entirely.
Investigative Journalism

The Virtual Mirage staff called the Clinton Campaign Headquarters in Los Angeles for a reaction to the current Weinergate scandal and spoke with Megan M., an official (or maybe just somebody who answered the phone). Megan said that they were very busy because of many calls from the press (and you know that VM is at the cutting edge of journalism). I said that I needed a quote.

Megan M.: I really don’t know what to tell you. We think that the FBI is prejudiced against Mrs. Clinton.

VM: Did you think that in July when the FBI gave Mrs. Clinton a pass on her many security breaches and her sloppy handling of classified information?

Megan M.: No, back then we thought that they were being fair.

VM: What changed at the FBI?

Megan M.: Maybe the Republicans got to them? Maybe it has something to do with the fact that Mrs. Clinton is a woman.

VM: Are you suggesting that the vast right wing conspiracy has something to do with this?

Megan M.: I guess I am. I think that Trump and maybe George Bush are behind it.

There you have it.  Proof that Donald Trump and George Bush are to blame.

US Immigration – A Matter of Numbers