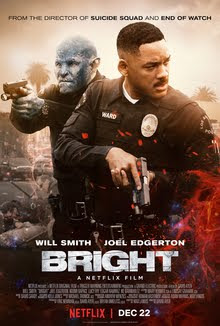 Facebook
Twitter
Pinterest
WhatsApp
Set in Los Angeles in an ‘modern, alternative timeline’, Bright presumes that the Lord of the Rings characters have been living together since the time of ‘Middle Earth’. The story follows two LAPD officers, human Daryl Ward (Will Smith) and rookie Orc cop Nick Jakoby (Joel Edgerton), as they encounter a powerful magical weapon that could change the balance of this world if it falls into the wrong hands.
Humans are…human, elves occupy the elite position in society as the intelligent, clever characters that they were in Lord of the Rings, and orcs are heavy, slow and fairies are annoying, flitting here and there.

There I was, last night, without much to watch on tv and I defaulted to Netflix and landed on Bright. I approached the movie with a great deal of skepticism. Elves, orcs, fairies and so forth in the modern world didn’t sound that interesting, but the principal cast of Will Smith, Joel Edgerton, Noomi Rapace, and Lucy Fry and the production team led by David Ayer intrigued me. And I’m glad that I viewed the film. It was good. And I found that there is a sequel in the works, which will be a MUST SEE. Many critics had a different opinion, but I don’t care much what they write.
It is a $90 million production – no skimping on the budget. And it worked, at least for me. I agree that it was an unusual ‘buddy movie’, a blend of orc and human police officers. But there were enough twists and turns over possession of a magic wand that it kept the whole project interesting. I didn’t look at my watch once and was let down when the film ended. It was a good end, but I was ready for more.
Should you watch BRIGHT?
Up to you…but I may watch it again. That’s high praise.