Mother’s Day Entry (from the annals of the Old West) 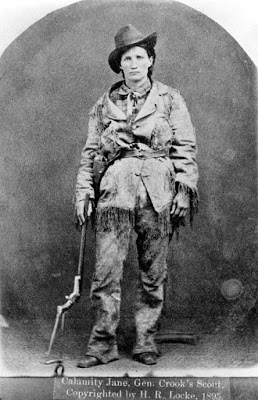 Facebook
Twitter
Pinterest
WhatsApp
Being a mother in the Old West was tough. For this Mother’s Day entry, I chose an unlikely candidate, Martha (Calamity) Jane Cannary. She was known to have one daughter with Clinton Burke (married 1886), who they named Jane. Young Jane was given up for adoption. She brought another girl with her to Deadwood, who she claimed to be her daughter. That girl’s name is not known, but there were accounts in the local papers of the day wherein fundraisers were held to give the girl an education. A possible third daughter, named Jean Hickok, applied for a military pension under her mother’s military service. She had letters, allegedly written by Calamity Jane to prove that she was her daughter.
Calamity Jane was said to be illiterate, but a diary remained wherein she she wrote to Janey. There is a school book in historical archives with Martha Jane Cannary’s handwriting in it, and the handwriting matches. I leave it up to the reader to decide whether this is true or not, but it’s part of the government record of Jean Hickok’s application for her mother’s pension.

*There is no record of Bill Hickok marrying Martha Jane Cannary in Deadwood. During that period of her life, Calamity Jane was a degenerate drunk who seldom washed.

Calamity Jane was born as Martha Jane Cannary on May 1, 1852, in the town of Princeton, Mercer County, Missouri. The daughter of Robert W. Canary and Charlotte Burch, she was the eldest of six siblings, with two younger brothers and three younger sisters. In 1865, her father moved the family via wagon train to Virginia City, Montana. Her mother died along the way. The remaining family only spent a short amount of time in Virginia City before moving to Salt Lake City, Utah. Her father started farming, but died in 1867, leaving the 14-year-old Martha Jane to raise her younger siblings. She moved them to Piedmont, Wyoming and US Census records show them living there in 1870.
While in Piedmont, Martha Jane took on any jobs she could get to support her family. She claimed to have worked as a dishwasher, cook, and waitress in restaurants, as a dance hall girl, as a nurse, and even as an ox team driver. In 1874, she began working as a scout for the army at Fort Russell, Wyoming. She also worked part-time as a prostitute at the Three-Mile Hog Ranch in Fort Laramie, Wyoming. Those who knew her during this period described her as being very attractive.
Her job as a scout led her onto the Great Plains and a rough and surprisingly adventurous life for a woman of her time. She was involved in more than one military campaign against the Indians. It was during one of these campaigns that she claims to have been given her nickname of Calamity Jane.

After a few years of working on the Great Plains as a scout, she lost the good looks of her teen years. Life on the prairie was tough for a woman. It must have been even tougher for Calamity Jane. Her skin tanned and became leathery, she developed muscles from hard work and she developed a masculine look. She was known for seldom bathing or washing her hair.
Jane arrived in Deadwood, South Dakota in 1876 as part of a wagon train led by Charlie Utter and Bill Hickok. She became friends with Dora DuFran, the best-known madam in the Black Hills area.
In Deadwood, Jane was a well-known resident and town character. She had adventures there, including saving passengers in a stagecoach that was being pursued by Native Americans. The driver was killed in the pursuit, and Jane rode up on horseback, jumped on the coach, and took the reins, driving it to safety in Deadwood. She also acted as nurse to the victims of a smallpox outbreak in Deadwood in 1878.
She joined Buffalo Bill’s Wild West Show in 1893 as a storyteller, but alcoholism created a difficult situation both for her and for the show. Her last public appearance was as a storyteller at the 1901 Pan-American Exposition.
She died in 1903 of pneumonia (age 51) and was buried next to Wild Bill Hickok in the Deadwood cemetery (Boot Hill).
I can’t separate a lot of the truth from the myth of this famous Western mother. Maybe you can do a better job. Census records, US Army Payroll records and newspapers of the day provide what documentation that there is.