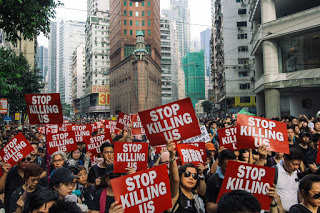 Facebook
Twitter
Pinterest
WhatsApp
Hong Kong
The escalation of violence in Hong Kong is predictable and will follow predictable patterns. The Communist Chinese don’t know quite what to do about it, except to escalate it.

CNN – The shooting — the first time police officers in the semiautonomous Chinese territory used a live round against a demonstrator in nearly four months of protests — represented a new escalation in the violence that has roiled the city.

Tsang Chi-kin, 18, showed no interest in politics until this year. After being shot by the police, he could become a potent symbol of the protests.

Tsang was shot in the chest. The hollow-point bullet narrowly missed his heart and spine, but pierced a lung. As of Wednesday, he was in intensive care but in stable condition, according to the Hospital Authority.
Supporters of the pro-democracy protests say the episode epitomizes all that is wrong with a Hong Kong government that has prioritized brute force over genuine political dialogue.
On the flip side, the police officer’s actions constituted justifiable self defense. However, it will become a far more common story moving forward as this mess expands.
– Hong Kong Mail –
Jules – See this is what happens when you stop being a British colony – it all goes tits up! And you become the forbidden planet. 😉 Is this still classed as clowning around?

I still spend about four hours a day on the phone with China. HK would have been much better off it had remained a Crown Colony, but that’s not how it rolled and the people of HK don’t want to be subjects of a tyrannical regime. People in China still refer to the foolish members of the US Congress and I have to grin and bear it. It’s embarrassing having somebody like Maxine Waters or AOC or Jerry Nadler in positions of authority. It does make democracy look as if somebody needs to pour bleach in the gene pool.

In a word, yes. The Chinese are still mulling things over. The police shooting a student shook them because I predicted it completely including the circumstances under which the officer would fire. I suggested that if they were to issue ammo, that they use simunition, beanbag rounds or some other less lethal option. It gets people’s attention without killing them. (sure, an eye shot could be lethal, but it’s generally less lethal than a .38 hollow-point fired at point blank range.