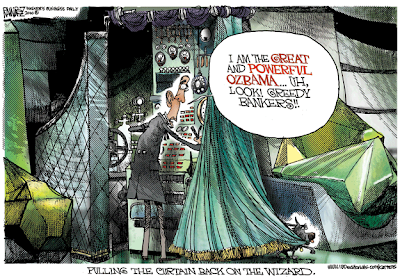 Barack Hussein Obama doesn’t think we get it. People voted for Scott Brown after he endorsed Coakley. What happened to the old Obama magic and what’s he going to do about it?
The first thing he’s promised is to give more speeches. He gave 411 speeches and 158 interviews last year… but he thinks it’s not nearly enough. He’s chopping but the chips aren’t flying. The lies are NOT sinking in and he’s bound and determined to speak until we believe his line.
He’s also promised to go after evil bankers and essentially wiping them out so that the government will have sole control over all banking in the United States. It’s not comforting since it is the government that brought about the banking crisis. Our leader, a utopian socialist, believes that government is the only solution and he’s going to do his best to demonstrate it — as unemployment numbers continue to rise. He wants to put more people on the government payroll to “fully employ everyone” without understanding that it’s private taxpayer dollars that grease the gears of state.
My message to Obama: Stop blaming George W. Bush for your inept management of government. People think you’re the worst president in history right now. Blaming Bush for your decisions will keep you in the last place slot for a long time.
As Paul Krugman, the New York Times’ “Conscience of a Liberal,” put it: “He Wasn’t The One We’ve Been Waiting For.” Not the once-delirious Europeans, either. As the headline in Der Spiegel put it: “The World Bids Farewell To Obama.”