More on Makers and Takers 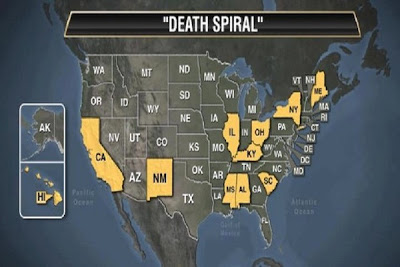 Forbes editor, Bill Baldwin, reported that these eleven states are at high risk of financial collapse because (a) there are more people receiving government pay outs than are working and (b) they maintain policies that ‘chase out the private sector jobs that support their spending habits’.

Baldwin reached his conclusion by comparing “makers” and “takers.” For this purpose, he wrote, “a taker is someone who draws money from the government, as an employee, pensioner or welfare recipient. A maker is someone gainfully employed in the private sector.” Then he factored in an index that downgrades states for “large debts, an uncompetitive business climate, weak home prices and bad trends in employment.”
You may be shocked to see that uber-progressive states such as California, Illinois, New York and the ever deep blue Maine are on this map. Those appear to be the national trend setters in our ObamaNation.  If I was a Democrat, I’d be howling that the other 39 states need to bail these states out. They need our love and support during their hour of need. Maybe our new slogan should be.
“I’m working in fly-over country
to keep New York and California solvent!”