I’ve seen people (men, women and even children) wearing Molon Labe t-shirts around. Some have the more or less traditional graphic (right) and some have more exotic renditions. It’s even stranger than you might otherwise be inclined to believe, because I live in the People’s Socialist Republik of Kalifornia. California boasted (loudly) of the toughest firearms control laws in the nation until New York went them one better this week. I first saw them when shopping at the Costco in Yorba Linda, CA. Yorba Linda (also known as the land of gracious living) is not known as ‘nest of rednecks’.
What does it mean?

(Wikipedia) The phrase molon labe means “Come and take”. It is a classical expression of defiance reportedly spoken by King Leonidas I in response to the Persian army’s demand that the Spartans surrender their weapons at the Battle of Thermopylae.

COME AND TAKE (THEM)

The phrase was reportedly the defiant response of King Leonidas I of Sparta to Xerxes I of Persia when asked to lay down their arms and surrender, at the onset of the Battle of Thermopylae (480 BC).

In the Second Amendment or firearms freedom context, the phrase expresses the notion that the person uttering the phrase is a strong believer in these ideals and will not surrender their firearms to anyone, including governmental authority, without strong resistance. 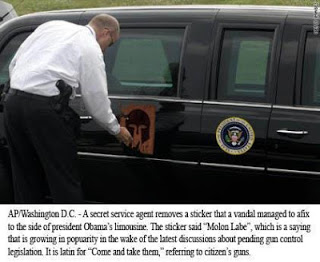 King Xerxes threatened King Leonidas that his archers could fire so many arrows that they would blot out light from the sun. Leonidas replied, “Then we will fight in the shade.”
Hollywood’s take on the event:
(Fox News) PORTLAND, Ore. – An Oregon sheriff has sent a letter to Vice President Joe Biden saying his department will not enforce any new gun laws it considers unconstitutional.
Linn County Sheriff Tim Mueller, in his letter dated Monday, said politicians are “attempting to exploit the deaths of innocent victims” by supporting laws that would harm law-abiding Americans. The sheriff said he took an oath to support the Constitution, and laws preventing citizens from owning certain semi-automatic firearms and ammunition magazines would violate their rights.
“We are Americans,” Mueller wrote. “We must not allow, nor shall we tolerate, the actions of criminals, no matter how heinous the crimes, to prompt politicians to enact laws that will infringe upon the liberties of responsible citizens who have broken no laws.”
Mueller told The Associated Press in a phone interview from Albany, Ore., that he felt compelled to make his views known because sheriffs have not had much of a say on the vice president’s anti-gun violence task force. Mueller said his constituents have been repeatedly asking his deputies about what will happen if new gun restrictions are adopted.
“We’re restricted and prohibited from enforcing all types of federal laws, including immigration laws,” he said Tuesday. “It would be unreasonable for anyone to think that I would enforce a federal firearms law.”