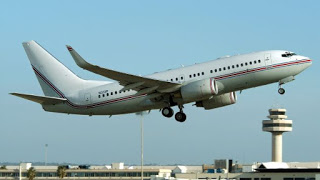 
(Mother Jones) This is from Mother Jones, possibly the most ‘progressive’ rag in the news magazine business. There are bits that I cut but I left quite a bit in, because it ads to the interest of the article that I’m sharing.
It’s only $27.5 million. You (yes you)  can own a valuable memento of an interesting part of recent American history. The jet is currently for sale in Dallas, Texas. (LSP, jump right on it. It would be perfect for the Anglican Secret Service) The Boeing 737 business jet seats up to 16 passengers and includes one queen and two single beds, a lounge bar, and three built-in 42-inch TV screens. (don’t use a black light in the sleeping area)
It’s the Jet that the newsies loved to follow.
The jet’s history can be pieced together from news clippings, human rights reports, and Federal Aviation Administration documents. In 2006, the Chicago Tribune reported on a specially modified 737 with the tail number N313P, which had been observed flying between the Middle East, Europe, and the United States. The paper linked the jet back to the CIA through a series of front companies around Washington, DC. One of those companies was Premier Executive Transport Services, which had taken ownership of the new plane in May 2002. The Washington Post found that the names of 325 people ostensibly affiliated with this shadowy company could be traced back to five Beltway-area P.O. boxes. When reporters searched for some of those names in public databases, what little they could turn up was a bit spooky: “Although most names were attached to dates of birth in the 1940s, ’50s or ’60s, all were given Social Security numbers between 1998 and 2003.”
During its time with CIA-linked companies, N313P flew all around the world, landing in spots like Morocco, Afghanistan, Libya, Uzbekistan, and Guantanamo Bay. In September 2003, it touched down at a remote airport in Poland. As the Tribune later suggested, this trip may have had something to do with the Polish intelligence complex in Stare Kiejkuty, which the European Court of Human Rights later found housed a secret CIA site. Before the release of the Senate intelligence committee’s 2014 report on the CIA’s post-9/11 detention and interrogation program, the Washington Post reported that American intelligence officers had probably abused and tortured detainees at the black site at Stare Kiejkuty. N313P landed near Stare Kiejkuty at least once.

For those of us who travel, the fluctuating price of a seat on an airplane is annoying. Seat pricing is controlled by an algorithm in a computer and it is set to match supply and demand. I flew from Ontario, California to Dallas, Texas the other day on late notice – same day turn-around – first class on American Airlines, on five day notice. The price of the return ticket was $2000.00. There weren’t any coach seats remaining and I had to get there for business, so the customer paid the freight. It’s part of the price of a face-to-face meeting. I have another one tomorrow but it’s in San Diego, CA. Cheaper for them, easier for me.
Recently United Airlines had the Chicago Police Department pull a passenger (69 year old doctor) from an aircraft bound for Louisville, bloodying his face in the process.  The video is viral and I won’t post it here. The stock price dropped $1.5 billion as a result. Nobody wanted to give up their seat, so the airline chose the passenger off. CEO Oscar Munoz says that he stands with the employee decision to evict four paying passengers to that 4 crew members could dead-head it to Louisville. If they want to do that, they need to stop the passengers at the gate. But if they can adjust what they are willing to charge, shouldn’t passengers be able to hold out for the highest bid? Eventually United would have found a taker at somewhere less than $1.5 billion.
The 69 year old physician will heal and his financial compensation for pain, suffering and inconvenience will be in the high seven figures, which is nothing compared to the loss of $1.5 billion to United. They could have paid passengers up to $1,350 to vacate their seats but they didn’t. The policy to send in the police, beat up the old man and haul him, bleeding, from the airplane didn’t win the “Friendly Skies” any awards for customer service.
Hauling the Devil 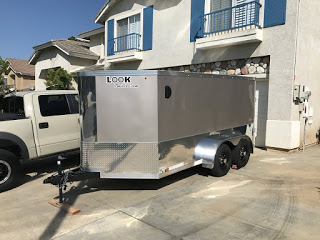 I ordered a custom trailer to haul the Ducati Diavel and a yet to be purchased dirt bike around. It was delivered today. I’d install the Condor wheel chalks for the motorcycles tomorrow but I have to work.
My concept is that while I like to make runs on the Diavel, getting a bit closer – like 1,000 miles closer – to the destination in a trailer and then unloading the bike and riding around would be far less stress.
This Look Trailer is 12′ x 7′ and it’s low enough to fit in the garage, which will eventually be it’s storage place. 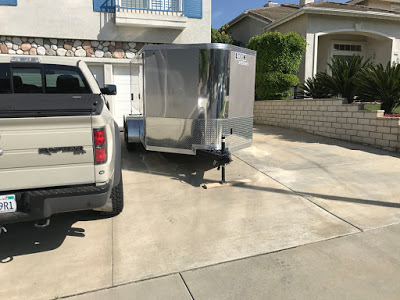 Hauling the Devil is one of my retirement programs which is finally being realized. I understand that it’s a trivial thing, but I’m excited about using it this coming summer. There are plans to take it to Canada in Summer 2018 for a run. If I’m still blogging then, I’m sure that it will appear here on Virtual Mirage.