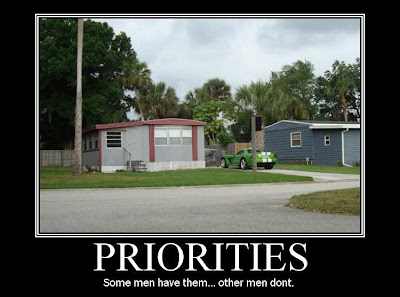 Odds on the guy who owns the Viper and lives in the mobile home that’s not mobile is:

(a) Single
(b) Dating attractive women.
(c) Having a lot of fun.
(d) Maybe going through a mid-life crisis. (because most young guys can’t afford a Viper)
Which brings me to the subject of the so-called mid-life crisis. What is a mid-life crisis when one speaks of men? (I can’t address the woman angle but there is one) I’ll answer my own question.
Guys go through life doing what it is they think they’re supposed to be doing until one morning they wake up and find that the hour glass is less than half full. They weren’t able to do what it is they wanted to do, there isn’t all THAT much life left and they are left to decide what is important to them. For some, it’s a girlfriend half their age, a Viper, a divorce and so forth. For others its a grim wake-up call that they can’t cheat the reaper but they go with what they have. And unless a guy is a happy idiot, he’ll go through that thought process sooner or later.