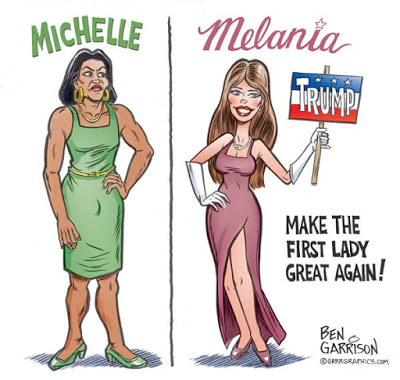 Facebook
Twitter
Pinterest
WhatsApp
America will undergo a change in the White House when the Obamas move out and the Trump family moves in.  And because this is Sunday, it’s your sermonette!

There have been a number of suggestions made over the years that Michelle Obama has features more in keeping with a man than a woman. She never was made “woman of the year” so the Bruce Jenner comparison can’t be made.
Then again, Joan Rivers died soon after “outing” Michelle Obama as a tranny. Coincidence? You decide. I won’t take a position on the matter. I value my life.
Moving on, would Melania Trump make a better first lady than Bill Clinton? I’m not suggesting that I think Hillary will win the presidency or even dodge an indictment, but Bill would be an awkward first lady no matter what anyone says. The whole cigar dipping thing will damage the image of the American First Lady forever…not that Michelle hasn’t tarnished it considerably.
Michelle doesn’t like living in the White House, “It’s the story that I witness every single day, when I wake up in a house that was built by slaves.” The Obama presidency has been an embarrassment for many Americans at home, but it’s worse for those abroad who are bombarded by questions such as this one, “How could your leadership be that stupid?” 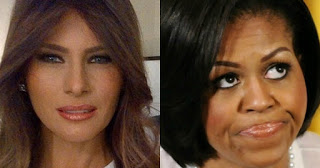 Many in the hierarchy of the current Mexican government feel that Trump would be a better president than Obama has been because the wall would help reduce corruption in their own government and along the border. They are government people and the rule of law is always better than the anarchy that currently lives at the border. That doesn’t filter down to the US media well, but it’s true. I speak to them personally and have known them for decades. Those same people feel that Michelle Obama harkens to (unfortunately) appear a lot like a Star Wars cast member. They feel that Melania Trump would restore the decorum that they have come to expect in an American First Lady.