The Mess in Libya 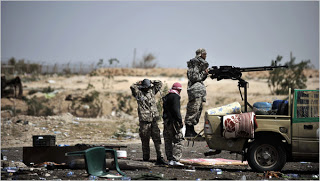 Facebook
Twitter
Pinterest
WhatsApp
Libya is in the news – then it’s not in the news.
Libyan rebels are freedom fighters – then they’re suspected jihadists.
Gadhafi is considered for a ‘role’ in future Libyan politics – then he’s not.
The African Union’s peace initiative provides an olive branch – and it’s rejected.
The world concerns itself with a massacre in Benghazi – but not Misrata where it appears that a large number of civilians are caught in the middle.
I think everyone in the Executive Branch of Government breathed a big sigh of relief when NATO (which is the US + EuroConfusion) announced that it had assumed responsibility for the Libyan can of worms. Now the United States can let the chips fall where they may without having Obama take any flack over it.

The Libyan rebels don’t want foreign troops on their sacred soil – but they’d be happy if NATO aircraft blasted everything in front of them a little more effectively. But on the ground where one group of people looks more or less like another from 20,000 ft, and BOTH friend and foe often shoot at jets, it’s difficult to prosecute the close air support role.

“NATO is unpopular among many insurgents, both because they believe it initially reacted slowly to government attacks and because it has killed almost 20 rebels in two mistaken bombings.” (Reuters)

War is dirty and it’s complicated on the ground. The so-called ‘fog of war’ obscures things and the power of military munitions chews through soldiers and civilians with equal ease. Meanwhile the mainstream media in the US has said, “Nothing more to see here, folks – move on, move on about your business.”
The White House leaked a secret finding that authorized the US to send advisors in to aid the insurgency and presumably to provide some weapons to them. I suspect people in the Obama regime wanted to characterize him as tough? Frankly I don’t know why they leaked classified information but it does happen all the time from the very top (why bother to classify it in the first place?). Obama’s people also leaked that the CIA inserted personnel into Libya to assist with the air support mission. But the US is officially not really involved in this war because (wink) NATO is handling it.
I’d call it Obama’s Secret War, but it’s really not. It’s a mish-mash of double speak without a coherent end-game and without a declaration of our intentions to the American public. The US forces on the ground (secretly – but the NY Times reported that the CIA is there because the Obama White House leaked it) are once again put in the position of being placed in harm’s way without due consideration to what we’re doing and WHY we are doing it — because we’re not doing anything. NATO is doing it.

What a goat rope!