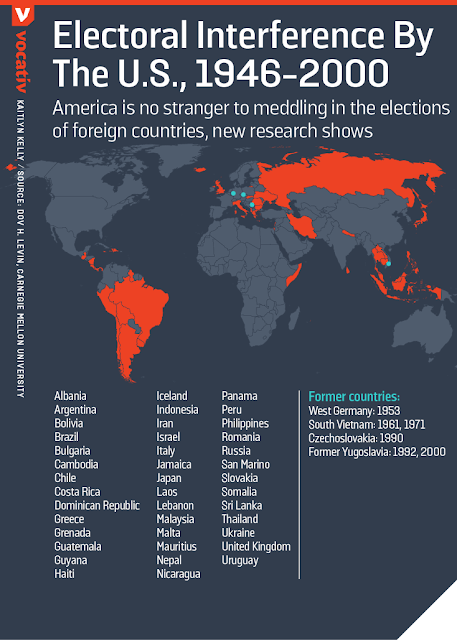 This isn’t the best of maps but it makes a point. This takes it to 2000. Let’s look at election tampering and regime change since then:
Iraq – Bush
Iran – Bush
Afghanistan – Bush
Egypt – Obama
Libya – Obama
Tunisia – Obama
Israel – Obama
Syria – Obama
Afghanistan – Obama
Somalia – Obama
Yemen – Obama
The US outrage at Russian mischief may be justified, however, we don’t have very clean hands when discussing this topic. In the past, we declared Russian diplomats persona non grata (PNG) and threw them out. They did the same thing to us. In the present, Obama PNG’d 35. Putin didn’t respond in kind, signaling the interest in a change. Whether it’s a genuine interest on his part or not is another matter.
The Russians want their sphere of influence respected. So does the US. We need to craft an understanding with the Russians where we treat them in much the same way as we’d like to be treated. It would be a novel arrangement, but it’s time has come. Would the agreement hold? As with all agreements, only if both parties want it to.