Meanwhile, in The Koreas 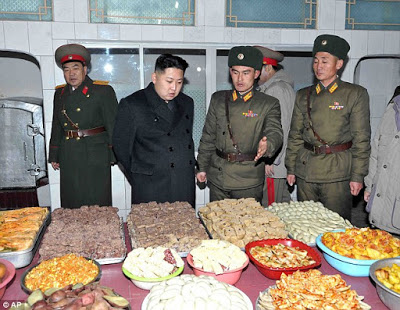 It’s winter in North Korea and the peasants are showing how tree bark can make a really tasty soup – because Dear Leader (the only fat man in North Korea) told them that it tastes great. And while the North Koreans starve to death, the US imposes more sanctions the Hermit Kingdom. The Norks don’t want to be blockaded. There is no indication that the US plans that, but the Norks still fear it.

Advanced naval mines could be used to solve that problem. Essentially, they’re torpedoes, tethered to the bottom, that fire up when a ship is in range. The Norks feel that the US would physically surround their miserable land with ships. That would be a waste of assets.

North Korea warned the US against imposing a naval blockade. On 14 December, a North Korean Foreign Ministry spokesman replied to a question asked by the Korean Central News Agency (KCNA) about the US and a naval blockade. KCNA published the response, which was in English.

The spokesman said, “The gang of Trump, being terrified by our accomplishment of the great historic cause of completing the state nuclear force, is driving the situation on the Korean peninsula more and more close to the brink of war, acting recklessly without any sense of reason.”

“The naval blockade the gang of Trump is trying to pursue is something that was already tried and ended in vain during the collective sanctions campaign against us undertaken by the Bush administration under the signboard of “Proliferation Security Initiative” in the early 2000s.”

“A naval blockade is an act of wanton violation of the sovereignty and dignity of an independent state and an act of war of aggression which cannot be tolerated.”

“The gang of Trump is taking extremely dangerous and big step towards the nuclear war by recklessly seeking the naval blockade against our country, neglecting the strategic prestige of our country that has achieved the great historic cause of completing the state nuclear force.”

“Should the United States and its followers try to enforce the naval blockade against our country, we will see it as an act of war and respond with merciless self-defensive counter-measures as we have warned repeatedly.”

The reply above confuses the Proliferation Security Initiative with a real blockade. 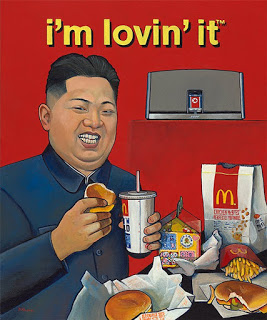 The Proliferation Security Initiative is a US-driven, multi-national effort to stop proliferation of weapons of mass destruction. US President G.W. Bush announced the initiative in 2003. It has the endorsement of 105 nations around the world, but not China, India or North Korea.
North Korea considered the global dimensions of the initiative as camouflage for a US program to stop North Korean weapons proliferation. The initiative was proposed after 15 Scud short range ballistic missiles and other weapons were found aboard a North Korean freighter bound for Yemen in December 2002.
A blockade of North Korea is unenforceable without Chinese participation, which will not happen. The difficulty with a blockade is that North Korea has a land border with China. China already has communicated that it will not allow North Korean civilians to suffer from sanctions.

The North Korean histrionics at the prospect of a blockade are just a bit more foolish than usual. Meanwhile, Dear Leader washes down his Happy Meal with a Coke (above).

China
Chinese navy ships are training in the Bohai Gulf. Chinese naval ships conducted a live-fire exercise off the North Korean peninsula on 14 December as part of a series of exercises in response to the security situation on the peninsula.
The Liaoning Maritime Safety Administration announced a closure area for the exercises in the waters west of Lushun in Liaoning province.

The Chinese aircraft carrier Liaoning participated for the first time since being declared combat ready. Xinhua reported, “In formation with several destroyers and frigates, the Liaoning carried out training in reconnaissance and early warning systems, air interception, sea assault, air-defense and anti-missile exercises.” J-15 fighters from the Liaoning conducted air strikes.
This is the second substantial exercise this week and the third this month. On Monday, 11 December, China and Russia conducted a simulated anti-missile exercise in Beijing. In the first week of December, the air force conducted exercises in the same area.
China’s National Defense Ministry said the Sino-Russian drills were aimed at boosting cooperation against threats from ballistic and cruise missiles in the region. “China and Russia oppose the development of a global anti-missile system and the cooperation on the anti-missile field would help protect both countries’ security as well as the regional strategic balance,” the ministry said.
The Sino-Russian anti-missile exercise coincided with a two-day ballistic missile defense exercise by the US, South Korea and Japan. The timing and nature of the Chinese exercises indicate they are demonstrations aimed at the US.
The Chinese are demonstrating that North Korea is in their sphere of influence. They also are backing up President Xi Jinping’s statement that China will not allow another war on the Korean Peninsula. This is at least the third time that China has conveyed that message since the Party Congress in October.
South Korean President Moon made his first visit as president to China. President Xi is poaching in the US sphere of influence. He hosted South Korean President Moon in Beijing this week. This was Moon’s first visit since becoming President in May.
President Xi said that wars on the Korean peninsula are never acceptable and that China would continue to support dialogue as the solution to the Korean confrontation.
Xi also warned that South Korea should “appropriately handle” its deployment of a US-backed anti-missile system, which Beijing saw as a strategic threat and triggered its worst diplomatic crisis with Seoul in recent times.
The South Korean daily Yonhap reported that the two President agreed on four principles for dealing with North Korea.

“They also reaffirmed their commitment to peacefully resolving all issues, including denuclearizing North Korea, through dialogue and negotiations, and agreed that an improvement in inter-Korean relations will help resolve such issues on the Korean Peninsula.”

President Moon called for a new start in South Korea-China relations. Moon invited President Xi to the winter Olympics and both presidents urged North Korea to participate in the games.
The meeting was cordial and the two leaders agreed to further develop their ties. President Moon was accompanied by one of the largest entourages of South Korean businessmen to travel to China.
The statement that a war on the Korean Peninsula can never be tolerated is a translation of a direct quote. China is having success in reinforcing President Moon’s disinclination for an escalating crisis that can lead to war. We judge that recent Chinese and Russian military activity is intended to show that China is determined to back up the two presidents’ statement with military intervention.
On a lighter note, South Korean President Moon formally met Chinese President Xi, after only seven months in office. North Korean leader Kim Jong Un has not met Chinese President Xi after 5 years in office.