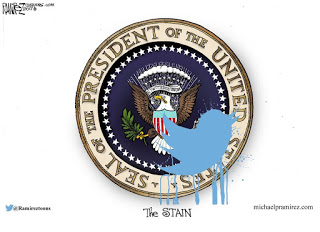 Six Months in Office
Yes, I too cringe at a lot that comes out of the White House. You know that Scaramucci was told to blaggard the other staff. Whether or not Trump approves of the filthy language that he used to describe HIS staff is something that I can’t speak to. Likely it was because Mooch still has his job. The President likes that New York in-your-face sort of approach that rubs a lot of people including me, the wrong way.
I think that General Kelly is an excellent choice for Chief of Staff because the whole operation seemed to need tightening up.
And when I get a little critical of style, I have to back off and say that I agree with what the President is doing. Yes, style notwithstanding. I agree with his approach to allowing the military to run the wars, and repealing 18 old federal regulations for every new one. I agree to the hiring freeze and the attempt to shrink the size of the government. I agree with his efforts in the Middle East (a perennial can of worms).
We didn’t have a choice. It had to be Trump. Those of you who have followed this blog understand my thoughts on the matter. The corrupt, elite, smug, nasty, lying mainstream media anointed JEB! to be the Republican nominee. What a train wreck that would have been. None of the other Republican candidates were (more) ready for prime time than Donald Trump. They memorized talking points and Trump openly mocked them because they were unable to deviate while he extemporized. Their handlers went insane and Trump ran his campaign on a shoestring, with promises to LOCK HER UP,  REPEAL and REPLACE, and BUILD THAT WALL.  Will he be able to do those things? He has 3 1/2 more years with a Republican majority legislature – many of whom don’t like him.
Hillary Clinton would have been a disaster of Biblical proportions on the heels of 8 disastrous years of ObamaNation.
The corrupt, elite, nasty, smug, lying mainstream media continues its war against the President and that may boomerang on them. The public knows all parties for who they are, and the media has no interest in making America great again.
So it’s President Trump, flaws and all. MAGA, I hope.
The Evolving Situation in North Korea

On 29 July, the Korean Central News Agency (KCNA) reported that “the second test-fire of the intercontinental ballistic missile (ICBM) Hwasong-14 was successfully carried out on the night of 28 July, Juche 106 (2017), under the supervision of Kim Jong Un Chairman of the Workers’ Party of Korea, Chairman of the State Affairs Commission of the DPRK and Supreme Commander of the Korean People’s Army.”
“He (Dear Leader), who is always bringing about ceaseless miracles and victories, baffling imagination of the world people with his rare military wisdom, great guts and stratagem, set forth the militant task for the rocket research field to conduct another test-fire simulating the maximum range of Hwasong-14 at an early date to prove once again the reliability of the whole rocket-system.”
The US Defense Department said the latest missile was launched at 23:41 (15:41 GMT) from an arms plant in Chagang/Jagang Province. The US accepted the North Korean assertion that the ICBM flew for just over 47 minutes and reached an altitude of 3,724km (2,300 miles). It splashed down in the Sea of Japan about 1,000 kms down range. As usual, North Korea did not announce a closure area or take any other precautions.
Various missile experts reported that this was a second ICBM launch. They estimated mathematically that in a standard ICBM trajectory the missile could reach Chicago or Denver. One analyst said it could reach New York.
The Norks are demonstrating the missile’s mobility. The road infrastructure in Chagang/Jagang is not well developed, but Chagang is a key part of North Korea’s wartime industrial rear area. It, and the three other provinces that border China, features multiple underground and above ground military, heavy industrial plants.
North Korea’s rear area military and industrial logistic system is railroad-based. The spur that runs from the coastal mainline northeast to Kanggye and then west to the China border serves the many military industrial cities along the right-of-way in Chagang/Jagang.
As with the 4 July launch, the launch site was at a military industrial plant, which has concrete pads capable of supporting a missile launch. The North Korean railway system serves the military plants at both locations. It is likely that the system is rail and road mobile. It also is likely that North Korea has more than one assembly site from which it can deploy and launch the missile.
One implication of the second launch site is that North Korea built the warfighting support infrastructure as it matured the missile. That raises the hypothesis that it could build many more missiles quickly. It does not appear to be launching prototypes.
South Korean Reaction
President Moon made two changes to South Korea’s missile policy after the North Korean missile launch. First, he consulted with the US about lifting the 500 kgs (1,100lbs) warhead limit on South Korean missiles. Moon wants South Korea’s missiles to carry a one ton warhead. South Korean missiles already have the range to reach any location in North Korea.
The second change is that he ordered four more Terminal High-Altitude Area Defense (THAAD) air defense systems.
The 28 July missile launch is being interpreted as North Korea’s response to South Korea’s offers of talks
Sanctions have not worked and are not likely to be applied so that they would collapse North Korea’s economy or cause an internal overthrow. China has not condemned the 28 July launch. The Foreign Ministry spokesman called for restraint and to refrain from destabilizing the situation. Expect no help from China.
Short of a general war that will go nuclear, one military option is to allow the North Koreans to have a system that they sacrificed greatly to build, but can never use because it won’t work. Assuming missile defense systems work as well as advertised, the deployment of layers of reliable missile defense systems against North Korea appear to be one solution for de-fanging North Korea’s missile threat.