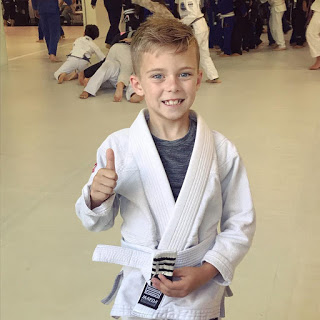 The LL grandsons are all martial artists to one degree or another (pun intended).  One studies karate and has a yellow belt now. Another is striping up on his white belt toward a gray belt in Jujitsu.
Naturally, LL grandsons are athletic and the ladies like them (see below). I would never have considered co-ed martial arts classes when I was growing up. Then again, the ‘hard style’ martial arts usually do not include women. At this stage it’s more like wrestling and the girls appear to be possessive of boys. 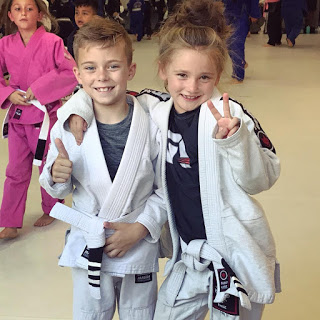 I had a slow day today (now it’s yesterday), went to the MD and got the flu shot, knocked about, went buy an Italian place where they feed me free of charge because they’re old school Italians and I’m family after a fashion. Tomorrow it’s the last trip to the White Wolf Mine in AZ before I move my stuff into the place. It won’t be finished until mid-October, but I’m storing some household goods in the garage until it’s complete.
When I moved to the rental where I am at the moment, I didn’t buy a bunch of moving quilts. For the trip to AZ, I did. You can excoriate me if you will because I got the best price an free shipping on Amazon.
Which brings up the question of who I boycott an why. If it’s an attack on the NRA issue, I boycott all participants to the attack. So far as I know, Bezos and Amazon have been too smart to do that. But I’m sure that it’s coming. However, once at the White Wolf Mine, the question of whether or not I will care what the fetid outside world does is another matter all together. 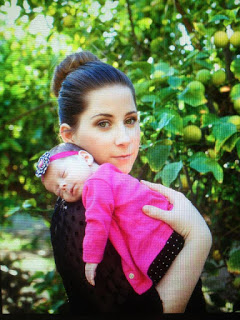 I have a daughter (right) who lives in AZ with three LL granddaughters, so there will still be grandkids readily available to spoil. One of the nice things about being a grandfather is the capacity to travel between children’s families and spoil them. Some have already submitted Christmas lists. Clever little people.