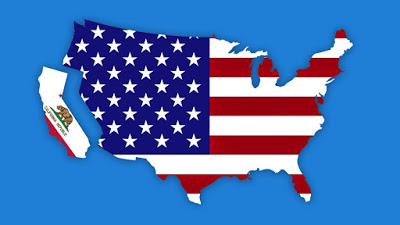 Keep California, or Let It Go?

(Washington Times) Anti-Trump secessionists filed formal paperwork Monday launching their petition drive aimed at separating California from the union by first putting the issue before voters on the 2018 ballot.

A petition submitted by the Yes California Independence Campaign calls for repealing language in the state constitution that describes California as an “inseparable part” of the nation and holding a vote on independence on March 13, 2019.

Organizers, who filed the petition with the California attorney general, said they plan to begin collecting signatures early next year to qualify for the ballot.

At the same time, the group is planning to hold #Calexit rallies in Los Angeles and San Francisco during the Jan. 20 inauguration of president-elect Donald Trump.

“This is our chance to show the world that Donald Trump is not California’s president and that we are going to take direct action to defend our values, preserve our way of life, and protect our people,” said a post on Yes California’s Facebook page.

The #Calexit campaign has six months to collect 585,407 valid signatures (nationwide), but the goal is to gather at least 1 million.

One thing is certain. If California leaves the union, the USA will need to build a wall around it to keep the progs in. As the Calexit movement grows, more and more progs are vowing to leave their east coast progressive havens and resettle in California – reverse Californication. Witches and freaks will flock to their new home, voluntarily segregating themselves in the worker’s paradise.

Personal Message: Brig, if that happens, the progs from Washington and Oregon who are moving south are likely to inundate you. Sell high, move north to the now evacuated Oregonian forests and buy low.

(Legal disclaimer: This is an informal plebiscite. Results are not scientific and may not necessarily reflect the opinions of the public as a whole.)