Review of the News (Mexico Edition)

(US News) A self-described debt collector for Mexican drug cartels says he has slayed more than 30 people across the United States, according to investigators. If Jose Martinez, 51, is found guilty of scores of homicides on both coasts, he would earn a place among the most lethal serial murderers in American history.

Investigators have confirmed that Martinez is responsible for a 2006 double-homicide in Marion County, Fla., a March homicide in Lawrence County, Ala., and at least 10 other killings in California, according to sheriff’s officials.
I wonder if he’s going to get white glove treatment the way that mass murder and jihadi, Major Nidal Hasan US Army has been?
Another Murder – and yet Another 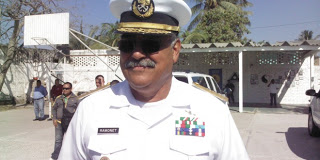 On July 28, 2013, Vice Adm. Carlos Miguel Salazar, Armada de Mexico, was murdered. Carlos was a friend of mine. He commanded the Mexican Naval District headquartered in Puerto Vallarta. He was driving in an unarmored SUV with a Mexican Navy driver and his wife. Nobody wore uniforms. He and his wife were ambushed as they returned home from vacation.

He pushed his wife to the floor of the car and shielded her with his body. She escaped unhurt, but she’ll never be the same, having been literally bathed in her husband’s blood.
It’s just another weekend in Mexico. A few arrests were made of token suspects. No convictions will result unless MEXGOV fabricates evidence to satisfy the cries from SEMAR (Mexican Secretary of the Navy).
The US News Media doesn’t report on much these days unless it’s the odd Obama Triumph (that is usually found to be a scandal later). They always sugar coat what’s going on in Mexico. Over thirty Mexican Federal Police officers were killed in Michoacan last week in an ongoing shooting war with cartels. Guadalajara is worse than it’s been in my lifetime, which is pretty bad when you consider that one of my guys was beheaded down there almost two years ago and I escaped an ambush in a separate incident with a few bullet holes in the car.
And because it underscores the need for a secure US/Mexico Border, the media is mute and officials of the ObamaNation could care less

Obama Administration officials are ringed with bodyguards to keep themselves and their kids safe. If a few Americans died because of an insecure border, what would it matter?

Where do Cartel Firearms Come From?

With the exception of a few smuggled handguns and the Fast and Furious weapons smuggled to cartels by the United States Department of Justice, Bureau of Alcohol, Tobacco, Firearms and Explosives (BATF), they come primarily from China and the Middle East.
Some military stores are sold out of inventory from Central American nations directly to cartels which paid top dollar. The point of original manufacture isn’t important. For the most part, cartels use the AK-47, favored weapon of China and Russia (old Soviet Union). Those weapons are not made in the US nor are they legal to possess as full auto – which means that they don’t originate from US gun shows.
Operation Fast and Furious was simply a clumsy effort by the Obama Administration to smuggle US firearms to the US so that the US could crow that American weapons were being used by cartels, thus justifying more gun control.
More recently the Democratic People’s Republic of Korea (DPRK) (North Korea) has been peddling weapons, most of which were originally made in China, to the cartels — because it earns them hard cash. If you make friends with them in Mexico, they’ll sell you literally anything out of the Chinese inventory.  Comforting?
US Border Policy

It’s always been a mess. It’s been a bigger mess under Obama than previous presidents because of the evident need to allow illegals to cross and vote for the Democrat of their choice.