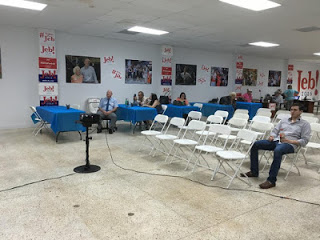 Jeb! Bush’s candidacy was heralded by the mainstream Republican Party as the way forward. Unfortunately for them, there are precious few who care one way about Jeb! no matter how many commercials he runs on TV. Somebody tweeted a picture of Jeb!’s debate watching party from his Florida Campaign HQ. (left) I’ve heard that more people showed up later and there were about twenty present at the peak.

I wonder if those who showed up did so for the free snacks or if they really want Jeb! as their next president?
The Jeb! Campaign fired back with the photo (below) of the Nevada Campaign HQ during the debate last night.
When I think of a high-energy room in Vegas full of Jeb! supporters (eating free snacks), this is clearly what comes to mind. The photo is courtesy the Jeb! campaign via the Weekly Standard. You’d think that all of the party faithful would have been there, cheering. Maybe they were. And it explains why Jeb! doesn’t have statistically significant poll numbers.
I think that America is tired of weak, uninspired leadership. I realize that there are a lot of mainstream Republican types who want to line up for all of the political jobs that are handed out by new president…but maybe they need to find a more likely host to attach themselves to.
Jeb! comes across as a generally lazy, entitled, spoiled mama’s boy.
Memo to Jeb!:  Every time you attack Donald Trump, he makes you look like an even bigger goof.