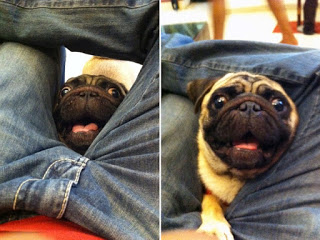 Facebook
Twitter
Pinterest
WhatsApp
Have you ever been mildly assaulted by somebody who wanted attention but you were not in the mood to care? (see left)
That’ how I feel about Jeb! Bush and his pathetic attempt to show that (a) he’s competent; (b) he’s an outsider; (c) he deserves public office. And all that he does is convince me that he is neither a, b or c. His commercial ads are much like the bum begging for a hand-out at a freeway on-ramp. I’m almost tempted to send him $10 if it would mean that he’d go away. 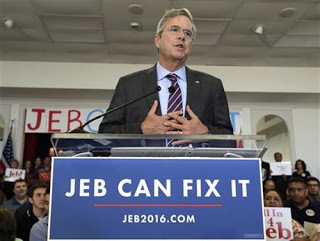 Maybe I’d give him $20 if he promised to leave – in a public setting with cameras rolling to hold him to it. But that’s not going to happen now that he’s involved in his fourth or fifth re-set with his highly paid mainstream handlers telling him what the public wants to see: “Jeb can fix it!” Really? That’s all he’s got? That’s all the pepper that he can put on the baseball?
Jeb reminds me of the kid in high school that was talking to (another) nerdy girl and you walked up and pulled his pants down to his ankles. He’s that guy. His response would be to say, “Curse you.” because he didn’t want to say the “F word”. You could pants him now if you didn’t have a heart or conscience. It would be like beating up on a gentle farm animal. Still–> Metaphorically it happens to him every day now that he’s made it clear in a weird sort of way that he wants to be leader of the free world.
On the bright side, he is capturing 5-7% based on polling. On the bad side, most of those people are selecting him as a preference because of his brother or his father — or they are Republican Beltway types, who feel that they would financially benefit from another Bush in the White House. Jeb! should take no solace from the fact that his supporters form sort of a Democratic Party style chum line, expecting to get something in return for fawning over Jeb! even though he’s incompetent. 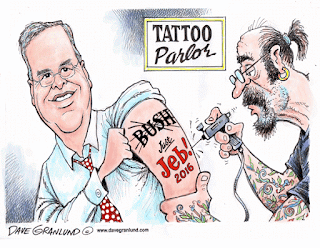 If you gave me a couple hundred million dollars, even I could run for president and get 5-7% with no name recognition. I’d have to get into the game by publicly calling Hillary Clinton a Lesbian slut and traitor or something, but I could do it by following Trump’s lead. They’re not facts that Hillary is likely to dispute.

Jeb! hates Trump because he felt that he was pre-anointed to be the next president. Almost an entitlement. However based on the last debate the only thing that he showed any passion for was Fantasy Football (a gambling scheme).

Jeb! needs to drop out and let somebody that America wants take his 5-7%. He’s a rich kid and can go back to the country club where the other sixty-something fat cats can commiserate with his loss. Maybe somebody will give up an early tee time to help assuage his grief?
UPDATE: