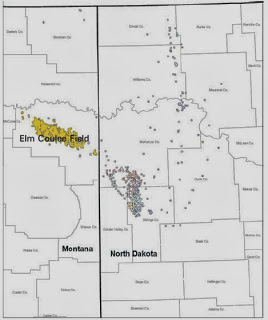 It’s hardly news, but to many people, it’s hope in the face of an otherwise dismal economy. I had a son-in-law who had difficulty finding work in California where the “unofficial” unemployment numbers are still in the 12%-15% range in many counties. While it’s true that my son-in-law did not have an adequate education (he’s still young), it’s difficult for young people to even get into college classes because the schools are over subscribed and cut backs eliminate class opportunities.
I suggested that he go to Montana and North Dakota and work in the oil industry, which he did. He works about 100 hours a week and his schedule is one month on and two weeks off. Yesterday he flew back from California to Minot, ND to begin another shift.
He doesn’t actually drill for oil. He works for a company that moves oil rigs from place to place. Most of the jobs in the oil business are not actual drilling jobs, but jobs that simply support the drilling effort.
Even with all of the work available up in that country (particularly in the very harsh winter months), you still need an ‘in’ to find the right job and the right crew. Fortunately I had friends who were able to help my son-in-law navigate the rocks and shoals of finding employment in the Bakken Field**. Today, he speaks of the urgent NEED to get an education because he’s come to understand that it is the key to advancement in his work in a way that all my talking and encouraging didn’t seem convey.

**The Bakken has emerged in recent years as one of the most important sources of oil in the United States. Most new Bakken drilling and production has been in North Dakota, although the play also extends into Montana, Saskatchewan, and Manitoba. As of 2013, the Bakken produced more than ten percent of all US oil production. In November 2013, the US Energy Information Administration projected that Bakken production in North Dakota and Montana would exceed one million barrels per day in December 2013.

As a result of the Bakken, North Dakota as of 2013 is the second oil-producing state in the US, behind only Texas.

America currently has larger proven reserves than any other nation on Earth. Brazil is emerging as a close third behind Saudi Arabia. You have to ask yourself WHY we are not working harder to be completely oil sufficient and then to begin both refining and exporting petroleum products. Why aren’t we drilling in the ANWR (Arctic National Wildlife Refuge) and other locations in Alaska? Oil sufficiency would make turmoil in the Middle East a lot less relevant to our day-to-day lives.