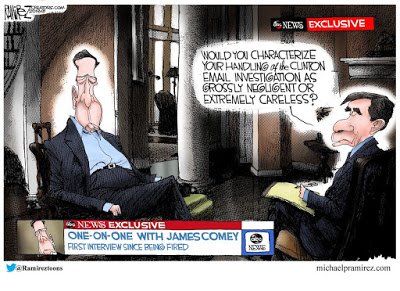 Was/is James Comey just incompetent or is the whining weasel that we see flogging his book (sort of a preparatory move to the Stormy Daniels book tour) a sly, smug, self righteous calculator who was bent on destruction of President Trump? That’s a loaded question because the Democrats feel that he betrayed Crooked Hillary Clinton.

I don’t believe that I will buy his book, not even to use as a doorstop, or as kindling for the fireplace, what a whining, miserable punk, James Comey has proved himself to be. What a self-promoting (kiss and tell) goofball. First we have Comey on tour and then the whore, but whether Comey or Stormy is the bigger whore remains to be seen.
Two Koreas
Live broadcasts agreed for 27 April. The two Koreas on Wednesday agreed to broadcast live key events of the upcoming inter-Korean summit, South Korea’s presidential office said.
Comment: According to Kwun Hyuk-ki, a member of South Korea’s delegation in Wednesday’s working level talks, the two sides are largely in agreement over issues concerning media coverage and protection for the two leaders.
North Korea will hold a plenary meeting of its ruling party’s central committee on Friday (April 20), state media announced on 19 April.
The meeting has been convened to discuss and decide “policy issues of new stage” to meet the demands of the current “important historic period.” This is the meeting where Kim finally will inform the Party elite about his diplomacy.
China Monitors
Xi’s forthcoming visit reciprocates Kim Jong Un’s visit to Beijing in late March, during which Xi accepted Kim’s invitation. The visit is timed so that he can get a first-hand report from Kim about the summit meeting with the US President.
Xi was serious when he made four proposals for improving ties with North Korea. Chinese leaders are allowing North Korean no opportunity to backslide from Kim’s acceptance of Xi’s proposals. The diligence of China’s follow-up with North Korea attests to the determination of Chinese leaders to not allow a callow North Korean youth to set the terms of security conditions in Northeast Asia.

Meanwhile in the US

Democrats are condemning CIA Director Pompeo for meeting with Kim Jong Un and working out the details of the meeting. Which is weird because the meeting was about de-escelating the situation in Korea and the Norks dismantling their nuclear weapons with China as the broker for that portion of the deal and joint inspections to verify de-nuclearization with the US and China. Would the Democrats prefer a war? No, not really, they just hate President Trump.

There was a big drum beat over a PRC live fire exercise as a prelude to an invasion of Taiwan (ROC)
The exercise turned out to be underwhelming. Taiwan’s Defense Ministry said the PRC drills involved only land-based artillery conducting “routine” gunnery practice.

The Chinese exercise failed to live up to its press buildup as a warning to Taiwan and as an intimidation exercise. It involved no naval or air phases. Taiwan held a counter-exercise that was larger than that of the Chinese.
Meanwhile in the South China Sea, the Chinese aircraft carrier Liaoning conducted a full range of exercises related to carrier warfare.