It Starts with Slime 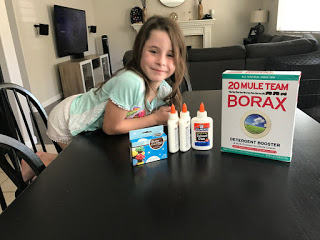 My daughter Heather watched her two boys and her sister/my daughter Kelly’s three girls today. Heather, never shy of a challenge, decided to make slime.
Kids love slime, primarily because it’s slimy. I think that this was a pre-Halloween experiment into the manufacture of slime as well as how well the kids liked it.
The girls made red slime and the boys made green slime. Two teams of slime makers, simultaneously trying to make the better batch of slime. It’s always a competition.
I simply served as a lab assistant and photographer.