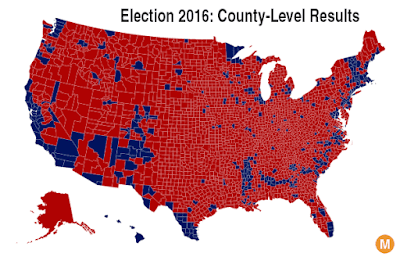 Then there are trained irregular cadre. China counts all of its farmers in this number. So do places like North Korea, but they are not trained. So I won’t count them.

Question: Which nation has the largest standing army, reserve army and trained irregular cadre on the planet (third rock from the sun)?

The answer, of course, it the USA.

West of the Mississippi and South of the Mason-Dixon, likely 8 out of 10 cars on the road have a firearm in them. There are somewhere between 150 million and 200 million firearms and an estimated 4.3 trillion rounds of ammunition in private hands in the US.

If you want to know what the distribution of these firearms looks like, just take a look at the voting map by county for 2016. The red areas were won by Donald Trump. The blue areas also contain armed Americans but possibly a smaller proportion.
America has a lot of combat veterans and a lot of self-trained people who own firearms.
Of these law abiding Americans who are essentially armed to the teeth, you hear nothing (no gun shots off the range). They are law abiding and firearms incidents involving them are statistically insignificant. Two thousandths of one percent of all firearms are used in a crime in America.
A lot of this irregular cadre voted for Donald J. Trump over Hillary Clinton (who promised to disarm them). Taken together, they are able to enforce the will of the people, should it come to a showdown. The police and military are likely to side with them against a tyrant. They don’t represent any particular racial group, but they are law-abiding and that’s their hallmark. Most of them are voting these days. Most of them reject the agenda of the mainstream media and the progressive punks that bully politicians. Most of them reject identity politics. Most of them are proud to be Americans.
Of the firearms owners – and let’s guess that number is around 150 million, around 1/3 are generally proficient, and of that 50 million, roughly half are lethal with their weapons. That’s 25 million armed marksmen. Look up at the map again. There’s hope for America.