Is the Weather Progressive? 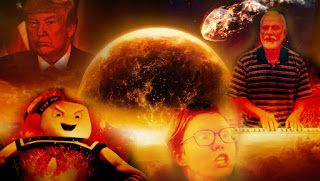 The Climate
Our fellow blogger, John D. sent me this link to remind me that the climate is indeed cooling (so far this winter, at least). It’s been warm enough to roast marshmallows in California as the progressive solutions to climate change would seem to be to release carbon (and CO2) by burning off the wildland, and reducing the consumption of electricity. So California may be the exception.

(Link) According to official NOAA data, more than twelve-hundred monthly low temperature records fell ACROSS the U.S. in October 2019 — multiple Arctic air masses rode anomalously-far south on the back of a wavy jet stream flow, itself associated with historically low solar activity.

The sun is currently in its deepest solar minimum of the past 100+ years, and the jet stream has weakened as a result; its usual tight ‘zonal’ flow has more-often-than-not reverted to a loose ‘meridional’ one. This wavy flow has diverted brutal Arctic air into the lower-latitudes, and is responsible for the U.S. either busting or tying a staggering 1204 all-time MONTHLY low temperature records in October 2019 (double the number of new heat records).

John D., who lives in Norway, usually has chilly winters. The last time I was there for work, John and I met with a professor who used skis to commute to work. We have learned that reindeer are facing extinction (along with Polar Bears) and that soon the planet will not see snow.  The people  who say that all want to be King (or Queen, if we are speaking of Warren and the Butt Guy) of America because of their wisdom and foresight. Other luminaries (mostly donkeys) also say that we’ll all be dead in somewhere between ten and twelve years, so why worry about it? Yet they worry.