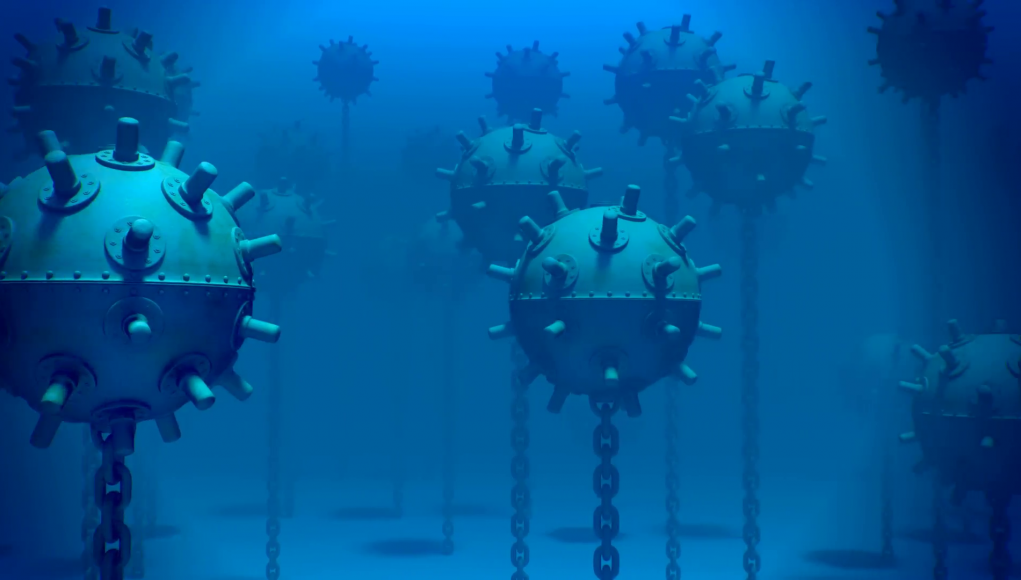 The world of Naval Mine Warfare, and a British film provide a historical context. A B-52 deploys Mk 64 stand-off mines. A Navy Mk VI Patrol Boat can also deliver mines.

The US Mk 65, first deployed in 1983, is a ‘new’ weapon. The Mk 65 is aircraft-laid bottom mines for use against shallow submarines and surface targets. Mk 65 is a 2000-pound weapon, employing a new concept, thin-walled, mine-type case, as opposed to the thick-walled bomb-type case of the Mk 64 and older variations that were re-purposed iron bombs.

To be fair to the Mk 65 naval mine, there have been upgrades. The Mk 65 includes a special arming device, a nose fairing, and a tail section adaptable to parachute option. All mines have the capability of making arming-delay, sterilization, self-destruct, and other operational settings.

What about bringing back a newer 2020’s version of an old favorite, the Mk 60 Captor (Encapsulated Torpedo) Mine? It was the US Navy’s only deep water anti-submarine naval mine. The mine can be placed by either aircraft, submarine or surface vessel. The torpedo, once placed, could last anywhere from weeks to years underwater.

The original production contract of the CAPTOR mine was awarded to Goodyear Aerospace in 1972, and entered service in 1979.  It was hoped to reduce minefield costs and used in the creation of a barrier of the “Greenland-Iceland-United Kingdom gap to interrupt Soviet submarines in the event that deterrence failed.” The mine used Reliable Acoustic Path (RAP) sound propagation to passively identify and track the difference between hostile submarine signatures, surface vessels and friendly submarines. Once identified, the torpedo leaves its casing to destroy its target.

Laying CAPTOR mines in the shallower and deeper portions of the South China Sea could create problems for PLAN (Communist Chinese) Navy’s submarines and surface fleet. The old Mk 46 torpedoes have been replaced by the The Mk 50 ADCAP or Mk 54 (less expensive) U.S. Navy advanced lightweight torpedos for use against fast, submarines. Either would be very effective if also used as the active component of a naval mine.

It’s time to think about the best ways of sinking the People’s Republic of China’s Army’s Navy’s ships.