Is the War on Women Over? 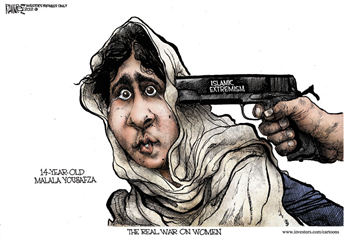 Facebook
Twitter
Pinterest
WhatsApp
The racist, homophobic, patriarchic voters who clearly dominated the recent mid-term elected. Senator Shelley Capito in West Virginia; Senator Joni Ernst in Iowa, Congresswomen Mia Love in Utah, Barbara Comstock in Virginia, Elise Stefanik in N.Y. Governors Nikki Haley, Susanna Martinez, and Mary Fallin. On the state level Asian women Republicans are scoring well: Ling-Ling Chang; Young Lim for the state assembly, and state senator Janet Nguyen. Even an 18-year-old woman, Saira Blair, beat an old hand Democrat for Congress — to become youngest Congresswoman ever elected.
And with the patriarchal, homophobic, gun and God clinging, racist conservatives voting women onto office, what does it say for the only angle that Hillary Clinton has to play? Senator Mark Udall’s pitch to Colorado voters was the war on women. That was the card he threw down. And he’s no longer in office having gone down to defeat.
The truth is that all women don’t feel as though their voice is muzzled, and conservatives have no interest in muzzling them as evidenced in the most recent election. Liberal women didn’t do well in the mid-terms and while they will naturally default to blaming men for their failures, it was more likely a repudiation of their champion, Barack Hussein Obama, whose numbers have been slipping.
Are the Black, Indian, Korean, Chinese and Vietnamese, and white conservative women who swept into office real women? They don’t support abortion under every circumstance, or forcing nuns to pay for their employees’ contraceptives and abortifacients, doing away with due process in college sex assault trials, or providing care for working women at taxpayer expense.

The Real War on Women is being waged in Islamic countries where women are denied most basic rights. However, don’t expect that to be trumpeted from the political pulpit. Expressing such sentiments would be Islamophobic, and would suggest that you need to be beheaded.
Conservative willingness to elect women to all offices in the federal government is not something that the Democratic Party is comfortable with. Neither is conservative willingness to oppose Sharia and Islamic perspectives on women’s human and legal rights.