Is Gadhafi a Dead Duck? 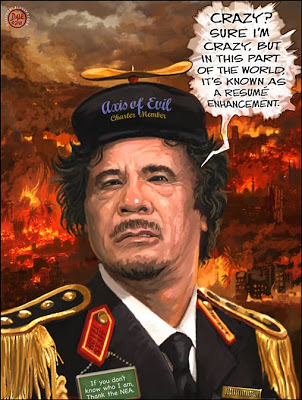 “A former Libyan Justice Minister Mustafa Mohamed Abud Al Jeleil told a Swedish newspaper he expected the increasingly isolated Libyan leader to commit suicide the way Adolf Hitler did at the end of World War Two rather than surrender or flee.” (Reuters)

The reports conflict at the moment and the oil market is bouncing up and down like a basketball at the play-offs. Today the Saudis guaranteed to increase production to match Libyan shortfalls… and everyone wonders if the House of Saud will survive. They increased the pay of everyone in the kingdom by 15% to “pour oil on the water” with unhappy subjects.
Meanwhile, nobody knows whether Gadhafi is alive or dead. His troops surged today, slaughtering and attempting to beat back turf gains that the insurgents made in recent days.
And while all the drama unfolds throughout the Middle East, New Home Prices dropped 12.9%, Wisconsin Democratic Party Legislators are hiding from the police in other states so they won’t have to do what the public hired them to do, and a full 26% of Americans believe that the US is “headed in the right direction”.
The only shocking bit of news is that unlike Obama, Gadhafi is blaming Osama bin Laden for his internal problems. If it (“it” meaning anything) happens here, the administration would have laid all blame at the feet of George Bush.