Is Donald Trump a Serious Candidate? 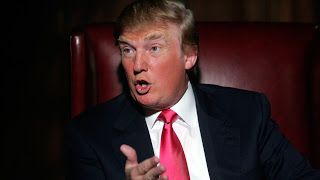 We’ve seen Donald Trump presidential candidacies before. They are best characterized as shameless self-promotion because “the Donald” likes the spotlight in much the same way as a cat loves catnip. He’s a bombastic bully with a full New York City state of mind going.
I suspect that if the media, Univision, Macy’s, Serta, etc. left him alone, that he would have dwindled, but that’s not what they’re doing. If you look at the American public, it doesn’t trust the mainstream media any more than it trusts Hillary Clinton (who could be said to practically control the MSM). Thus, the more that they attack, the higher Trump’s polling numbers go.
If you ask who I’d rather have as the next president if it was between the Hillary, the Bitch of Benghazi and Donald Trump, I’d take Trump. I am sure that the readers of this blog would agree with me on that. I don’t know that Donald Trump wants to be president (absent the spotlight) because it’s a lot of work and requires focus on the job rather than being fabulous.
The only thing that I would ask of Trump, should he ascend to the presidency, is that he get a haircut.