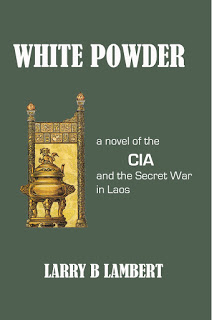 
Near Vientiane, Laos circa 1961
(p 39-42)
For your entertainment, while I’m on walk-about
The bar hut, where the Corporal Chef slept, was larger than the four brothel huts lined up like dominoes beyond it. The windows had been shuttered closed and the exterior was draped with mosquito netting. Cotton field uniforms hung limply over a drying line. As they walked to the stairs, Legionnaire Smith, a prematurely balding Englishman, stepped out into the sun, his uniform sharply creased and spotless. He looked over at Burton with mirthful blue eyes and tapped out Camel cigarettes for the Corporal Chef and Burton. Kreutz tucked the cigarette behind his ear and continued up the steps. Burton stayed with Smith to pass the time.
Smith struck a match and offered Burton a light. “Do you like the Carnet de Pouf, Captain?” Burton didn’t answer so he continued, lighting his cigarette as he spoke, “Tire un coup en ville, chez les poffiance de ville.”
“You’re controlle medicaile, right?”
“Yep, I sit here at this desk outside the bar area. As soldiers pick up the ladies they come to me for a condom and registration in the Carnet de Pouf. I take the soldier’s name, rank and compagnie he pulls out his knob, draws the foreskin back and squeezes to ensure there is no discharge typical of ‘chaude-piss’ – gonorrhea which carries a mandatory seven day stint in the stockade for self inflicted injuries.”
“Do you like the job?” Burton took a drag on the unfiltered Camel.
“Sometimes I’m teased by the other English speakers as being ‘la Roi du Corvee Bit’! Because I have to clean out the channel when it’s been infected with gonorrhea but damn, they really could find me a more dignified job. I trained as a combat medic.”

They smoked and watched a flock of white birds take to the air from the Mekong River, flowing to the south.
“I’m supposed to meet another American. His name is Sam Willoughby. Have you seen him?”
“He’s in the bar. He’s been here all night.” Smith motioned to the bar with his thumb.
Burton climbed the stairs and opened the flimsy wood slat door.
Willoughby slung a long leg over a chair next to where he lounged in the dark bar, staring at the wall. A pretty, exceptionally petite Vietnamese woman sat on his lap.
“Is this breakfast?” Burton asked.
Sam Willoughby was drunk, rumpled and looked like he hadn’t slept. He motioned to the chair offering Burton a seat.
“This is Lotus. We tried to do the Christian, Buddhist, Muslim trick last night. Lotus is a Buddhist.” Lotus’ eyes were sly as she slumped coyly against the man from the Army Security Agency. “Joy is from the North African Ouled Nail Tribe. She’s fat, drinks mint tea and is Muslim, and Dao, that sacred, precious little thing shipped out of The Green Latrine to this God forsaken hole, is Catholic.”
He waited for Burton’s comment, but all Burton did was stand up walk behind the bar and pour a tall glass of pénard. Burton lifted the bottle as if he’d found a prize. Willoughby continued unbidden. “Corporal Chef brought Joy. Joy was a pain in the ass. No way was Lotus going to screw Joy, even to please me and it had nothing to do with racial politics. Dao took off with the Corporal Chef. So, Lotus and I just sat on the floor drinking Mekong. And here we are.”
“I’m Craig Burton. You’ll be working for me.”
Willoughby replied with a wink. Then he squeezed the girl. “Lotus—My God, how I love you. I want to visit you on Sundays, when we’re both old.” Willoughby looked up at Burton. “I told her, ‘Lotus, you aren’t a whore.’” He stroked her breast through fabric, tenderly. “She asked me where I met her. I said, ‘Ok, in a whorehouse. But you’re different than all those other girls.’”
Lotus smiled and some of her gold dental work gleamed in the light.
Burton probed. “Rumor has it that you closed one of those high class bars in Manila because the disquiet in your soul needed it.”
“Now, who told you that?” Willoughby drew his oiled blue steel .45 Colt Model 1911 as he remembered. He brandished the handgun as he reminisced. “I brought along this secretary that I met there who worked for General Motors. She was a bottle blonde, the carpet definitely didn’t match the drapes, but who cares, cause she was white.
“This is how it was. I’ve got a .45, but big fucking deal. So does everybody else in the joint except the Aussies and they’re packing nine millimeter Brownings. This Mamasan legacy bitch struts up to me, arrogance personified. She starts in on me with a shrill voice. ‘You got a problem? I don’t know why you got a problem. I know who you are. I know you so goddamn important. Sam Willoughby, shit…you probably so goddamn important you came in here with your wife to get a girl. Is that your kink?”
“Is that your kink?”
“Sure, if I was married.” Willoughby said sincerely. “I quickly and eloquently stuck the .45 in Mamasan’s mouth and said, “You’ve got a .45 in your mouth.
“She blinked, ‘Yes.’
“The music snapped off. Everybody with a mind left listened to the best of their ability because they were vicariously interested in why Mamasan wanted to have rough sex with me.
“I told her, ‘I never said nothing about you. Why you say something about my friend, Mamasan?’ I hit her upside the head with my left hand. ‘I never called you bad names, but here you stand, with a singing ear and a fucking death wish, smart enough to stop sucking cock and stupid enough to start sucking guns.’
“She blinked a serious ‘Yes’ on that one. Who can blame her? Anybody would.
“I stood there with my .45 in her mouth and shouted so everyone could hear, ‘Mamasan, your mouth is like a whore’s pussy and I wanna cum. Know what I mean?’
“So the Army shipped you here to Laos so I could rehabilitate you.” Burton summarized the outcome.
“And here I am in the French mobile military bordello in fucking Wattay Airbase, busted from master sergeant to sergeant, serving Uncle Sam.” He lifted Lotus off his lap gently and whispered in her ear. She smiled at Burton and left through the front door.
“Sit down Captain and let me tell you something.”
Burton sat.
Sam Willoughby continued, “I’m jealous of dead soldiers. Dead soldiers have friends to avenge them and family to mourn them. They lie peacefully in neat graves, their bravery and sacrifice noted; buried in smart uniform, medals in velvet boxes, citations to hang on the walls and a folded flag in a cupboard somewhere. They said what they had done and where they had been, and when they died, their friends told how they died, and, from time to time, why they died.”
He motioned toward the glass of pénard Burton held. He handed it to Willoughby, who sloshed it in his mouth and then downed it with a toss.
“In the parlance of dead soldiers there is the front line. In the cant of my strange craft we call that place ‘the end of line.’ People in my business die alone. Our deaths are unsung, our motives unclear. So we die slowly. Every challenged moment of each belabored day is barbed and thorned with memory of the things we cannot tell. We die defenseless with naught to avenge us but the mute records of what we observed in the strange lands that swallowed us.”
Then he drifted. Burton took a grey wool blanket from behind the bar and put it over him. “Nice to meet you, Sam.”