Nations re-shuffle their intelligence structures due to bureaucratic demand or actual need from time to time. Both reasons are valid and I’m not certain why Xi Jinping (China’s president) has his fingers so firmly in the current reorganization.

(War on the Rocks) China’s Central Military Commission (CMC) announced a number of reforms to the way that the People’s Liberation Army (PLA) conducted the craft of intelligence.  President Xi Jinping, who also serves as the CMC chairman made the announcement. The proposed organizational changes may make this round of reform the most significant since those of the 1950s, when the PLA transitioned from a revolutionary army to the arm of a party-state. 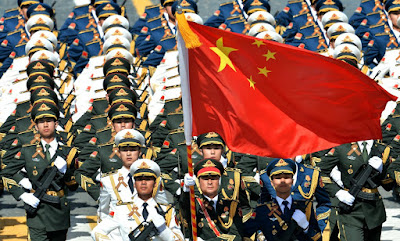 I don’t know Peter Mattis, who wrote the article above, but what I think that he’s saying – plz correct me if I’m missing something – is that the military intelligence structure of the People’s Liberation Army is taking a (small) step back from the General Staff Department in some areas by becoming more independent from the departments that it serves: PLA Navy (PLAN)*, PLA Air Force (PLAAF), and the PLA Second Artillery Force (PLASAF).

* The thought, stretching back to Mao is that navies are tools of imperialists, therefore in China, it is the People’s Liberation Army’s Navy (literally). It means that the Army needs some support from the sea, not that the nation has a navy – which is does, but political correctness reigns supreme, so it doesn’t officially. The Army has a Navy in China.

I encourage you to read the entire article cited.

In China, the People’s Liberation Army (in all its components which include the People’s Armed Police, which is completely separate from the Public Security Bureau) has an internal security mission as well as a traditional military mission. The actual number of personnel assigned to internal security intelligence missions – protecting the revolution – is classified, but based on what I’ve learned over the years, the numbers are staggering. And PLA intelligence is separate and distinct from the Ministry of State Security (Guojia Anquan Bu [Guoanbu]). That is also true of the Public Security Ministry – traditional police with a traditional police mission which also includes monitoring the public with plain-clothes personnel. The various entities in China step on each other all the time. If it sounds something like the USA’s bureaucratic web of agencies, all of whom despise each other, you’re right.

One factoid that isn’t all that well known outside of the craft is that each of the entities above is expected to be somewhat self-funded. Thus hotels, brothels, illegal gambling dens, domestic narcotics distribution and businesses, all generating revenue, are owned by some of these entities. Each have their lairs, their elite clubs, their arrangements. It’s completely Chinese (wheels within wheels within wheels). NONE of that will be impacted by President Xi Jinping’s reorganization because most of it is secret…but none of it is all that secret in China. The Chinese gossip as seriously as they gamble, which is to say that it’s raised to a high art – an article of faith.
It’s why China is so much fun.