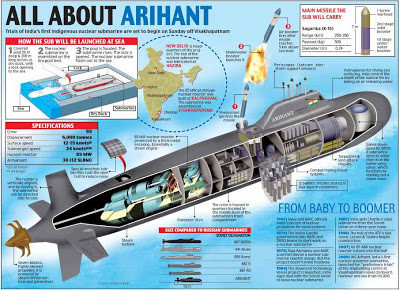 Facebook
Twitter
Pinterest
WhatsApp
The United States Fifth Fleet’s area of operation is the Indian Ocean and the American order of Battle changes to fit threats, support needs and the general political climate. India objects to United States Naval vessels that transit “its” ocean and they are taking steps to expand their footprint in the Indian Ocean.
Today, India’s indigenous nuclear-powered submarine, INS Arihant (trans. slayer of enemies), is almost ready to commence its first sea trials, four years after it was launched by Prime Minister Manmohan Singh and his wife Gursharan Kaur at Visakhapatnam in 2009. The 6,000-ton submarine has completed its harbor trials. Its nuclear reactor is ready to go critical.
This submarine will be armed with K-4 and K-15 submarine-launched nuclear-capable ballistic missiles (SLBM), which are still under development. It will be India’s second nuclear-powered submarine, joining the nuclear-powered hunter-killer submarine, INS Chakra, leased from Russia. India reportedly is interested in leasing a second Akula-class hunter-killer submarine.

The Indian Navy is the cutting edge of its assertion of strategic dominance in the Indian Ocean region against China. There is a grudge match to be fought between India and China over the Chinese invasion of India in 1962. Neither side is ready for that contest, but both know it is coming and are preparing for it.

The US? No, not so much. While India views the pseudo Muslim President Obama as a potential threat, the American alliance with Pakistan has been more linked with an association of convenience than it has with a direct threat to the Indian heartland.