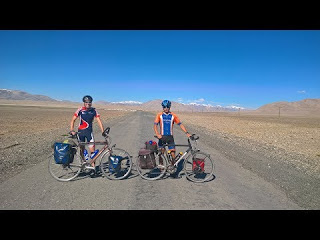 Riding a bicycle along the Silk Road along the Pamir Highway at the roof of the world from Dushanbe (Tajikistan) to Osh (Kyrgyzstan) has become a thing to do if you like to cycle. And while Tajikistan (95% Muslim and one of the poorest nations on Earth) is generally full of nice people, the exports are returning.
Which means that:
I have no idea how anyone could be so (f-ing) stupid as to voluntarily bicycle across Tajikistan, but they did and earned a set of Darwin Awards. On 29 July, a motorist drove into a group of foreign cyclists riding in Danghara. The encounter was deliberate and killed two US cyclists, one Swiss and one Dutch cyclist. Three others also were injured by the car, which then drove off.
Tajikistan Responds

Two people suspected of involvement in the incident were later killed by authorities in a special operation. According to the interior ministry, another four people were arrested in the same operation and a damaged car believed to have been involved was recovered. Another three suspects were “rendered harmless” after being traced to a village, officials said. You have to hand it to the Soviet-trained Tajiks, they do manage to torture information out of everyone suspected of involvement. Once that information is in their hands, they kill everyone suspected of involvement and their family pets as well and I admire that. The trial is handled on the streets of Daghera. No need to feed prisoners awaiting trial or to involve lawyers when a confession obtained by pulling finger nails out rendered the truth.
ISIS Takes a Bow
The Islamic State (IS) claimed responsibility for the attack on “citizens of the crusader coalition.”
The Islamic State’s Amaq Agency posted a report on the killing on 30 July.

“After placing their trust in God Almighty, a detachment of caliphate soldiers set out toward a gathering of Crusader coalition state citizens in the area of Danghara in Khatlon in Tajikistan, running them over and attacking them with knives. This left four dead and four wounded, praise and thanks be to God! We gladly announce to the Crusader coalition state citizenry what shall befall them, for what shall come will be more destructive and bitter, God willing!”

The mention of knives strengthens the credibility of the Islamic State’s claim of responsibility. Most reports omitted that information that the deceased also had been knifed.
The nation’s primary income earners are cotton and mineral ores. One of its less attractive exports has been Tajik recruits for the Islamic State in Iraq and in Syria. One concern is that Tajik fighters might now be returning from the Middle East to establish a presence in Tajikistan.