In Praise of Big Oil 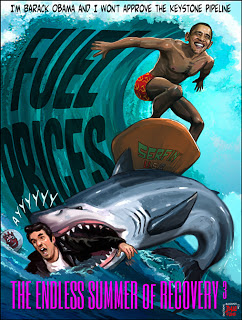 I’m not going to tick off every product (such as plastics, gasoline, and fabrics) that come from fossil fuel. However, without those fossil fuels, society would be stuck in the Middle Ages in much the same way a large portion of the Middle East is, socially.
I have yet to hear a Democrat take the stage without demonizing companies that extract those fossil fuels from the Earth. Usually the refrain goes something like this, “We have to make sure they don’t make a profit.”
Yes, you could almost be persuaded that Barack Obama is not a Muslim, that he’s a Mennonite who wants to cling bitterly to his horse and buggy – because that’s what he’d be riding on without fossil fuel.
(hanging my head in shame) I live in California where the gasoline excise tax is nearly $1.00 per gallon. Gloat, you deserve it if you don’t live in the People’s Republik the way I do. I pay roughly $5.00 per gallon for gasoline. And why are those fuel prices so high? There are two reasons: Supply and demand and federal blending regulations. Obama has all but stopped new drilling on federal land, blocked the development of oil resources in the Arctic National Wildlife Refuge and did not approve the Keystone Pipeline, which would increase the supply of petroleum in the US, reducing prices.
But Obama is a champion of the little people, which is why he wants to demonize oil profits, when it is the federal government that creates the situation that we live under. President Obama, in search of somebody that the poor can unabashedly despise, landed on oil companies. Those of you who heard the First Presidential Debate may recall that USGOV gives tax breaks to oil companies amounting to $2 billion per year. And Obama handed “green energy” subsidies out to his campaign donors of a whopping $90 billion – and most of those companies have subsequently closed their doors, taking the $90 billion with them. But it’s BIG OIL that is to blame.